Was actor Alec Baldwin arrested for first-degree murder and the possession of child pornography? No, that's not true: The Santa Fe County, New Mexico, sheriff said on October 27, 2021, that no charges have been filed in connection with the "Rust" film set shooting. There is no evidence to suggest Baldwin has been arrested for the possession of child pornography. Also, the website that made the claim is known for creating fictional stories.

The Santa Fe County Sheriff's Office has arrested Alec Baldwin and charged him with first-degree murder as well as possession of child pornography, and ordered a media blackout that has been approved by a judge. Outlets in the United States are temporarily banned from reporting on Baldwin's arrest.

Beaver ExclusiveThe Santa Fe County Sheriff's Office has arrested Alec Baldwin and charged him with first-degree murder as well as possession of child pornography, and ordered a media blackout 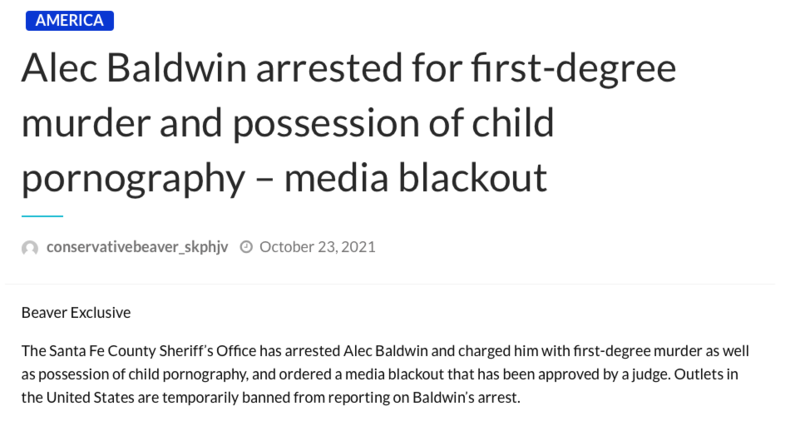 A Google search using the keywords "Alec Baldwin arrested for possession of child pornography" produced no results. The Conservative Beaver story cited no source for its claim.

As of October 28, 2021, Baldwin has not been charged with any crime related to the shooting. In an October 27, 2021, news conference, reported by KOB 4, an Albuquerque, New Mexico, television station, Santa Fe County Sheriff Adan Mendoza said about whether there were charges against any person on the film set, at 3:48 in the video:

In reference to possible charges, it's too early right now in the investigation to comment on charges at this point.