A spokesperson for the Food & Drug Administration said that cockroaches are most often found in unclean manufacturing plants, not around the cocoa bean plants used for chocolate products. There have been no specific reports of an allergic reaction due to cockroach allergen instead of a chocolate allergen, but it's possible, according to an allergist Lead Stories spoke to.

Most people with chocolate allergies are actually allergic to the ground-up cockroach parts found in every batch, not the chocolate itself. The average chocolate bar contains eight insect pieces; the FDA allows 60 insect pieces per 100 grams of chocolate. 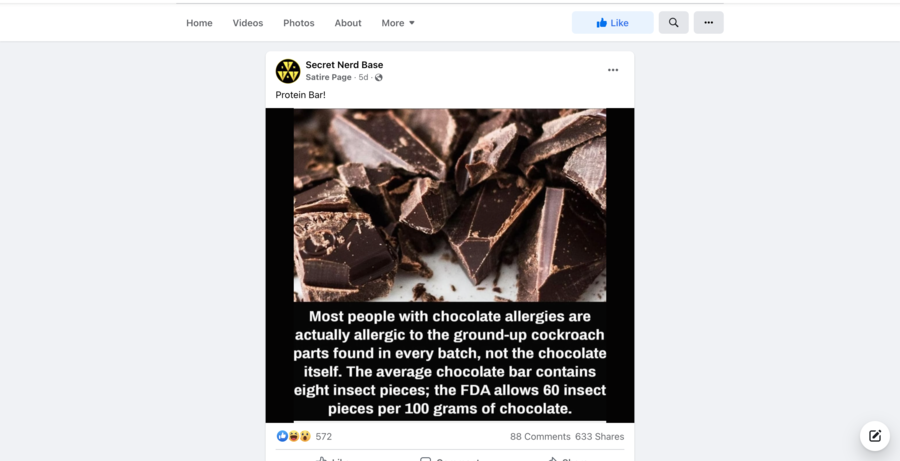 There are no sources listed for the claims.

According to the FDA's "Food Defect Levels Handbook," allowable insect "filth" or fragments for chocolate and chocolate liquor is, on average:

Lead Stories contacted the FDA, which responded in an October 27, 2021, email by saying that cockroaches aren't allowed near any of the food products, including cocoa products. Regulatory action would be taken if there were cockroaches or cockroach fragments found in the manufacturing plant that was making the food product.

In a October 28, 2021, phone conversation with an FDA spokesperson, we asked how could there not be cockroach parts in the chocolate products, but also insect fragments per 100 grams of chocolate. They said:

These are commodities grown in fields, so we have regulations that recognize that certain naturally occurring defects occur in the growing process ... One of those things that we recognize is insects that may be in the field. So then we go on to say there's these maximum levels that we allow before we will take a regulatory action of natural or unavoidable defects. So one of these things that we recognize is insect filth because insects are in growing fields ... Now separate from these natural defects, we have regulations that require once it's out of the field, you've got the cocoa bean in a processing plant ... there are regulations that companies are required to follow to make sure that they're following current ... manufacturing process. Essentially, they're taking steps to be clean, hygienic in a factory, so that there aren't pests like cockroaches coming into their factories and infestating [sic] their product ... Now, pests are different from unavoidable defects. Pests are things that are happening because there aren't being measures to keep a plant clean. In our regulations, we don't consider cockroaches the unavoidable, natural defect. They're more typically found in factories because a factory's not kept clean, we say this is not included with that defect level I mentioned earlier ... so because of that, there's no allowable level of cockroaches in food products, and that includes cocoa.

When asked if cockroaches were found in the field around the cocoa bean plant, would they be considered an "unavoidable, natural defect," the spokesperson said:

As I mentioned, we're not seeing that as an issue. We have a sampling program for cocoa beans, so I go on to say that we're not really seeing that naturally occurring ... that cockroaches aren't typically being found ... in cocoa bean fields ... That's not really a problem. It's more so we're seeing it, given insanitary conditions in the manufacturing plant.

The claim also states that there are eight insect pieces per one chocolate bar.

... Our regulations do not specify averages; however, please see the second bullet below for context. Specifically:

As for the post's claim regarding allergies, Lead Stories contacted Dr. Manav Singla, an allergist who works for the Allergy Asthma Specialists of Maryland. He responded in an October 27, 2021, email:

I have not seen specific reports of allergic reaction to chocolate product due to cockroach allergen but theoretically this is possible.