Is 5G a governmental cover-up linked to the death of birds as well as public health? No, that's not true: Lead Stories has debunked many of these claims before. There is no evidence to suggest the fifth-generation cellular network is dangerous, but that hasn't stopped the conspiracy theories from festering online.

The claim appeared in a post (archived here) published on Instagram by singer and songwriter Tyrese on April 9, 2020. It opened:

So many people don't know....... Not into conspiracy theories but have you guys heard about the government cover up? And the effects that this new 5G network is having on our health??? Can we talk about this guys.? Have you seen the videos online of 100+ birds that have died by falling OUT of the sky wherever they fly near or above these new 5G towers??? In the comments please let's speak on this real shit- [ supposedly while we're all locked down with strict STAY HOME orders they are swiftly installing millions of 5G towers in this country....... Headaches anyone? You hear about to 7 kids in ONE SCHOOL who got cancer and they discovered that the 5G towers were the cause????? [ the parents are all suing look it up on YouTube ] I don't lie - let's see if @cnn of @msnbc or any news outlet will address this real shit..... 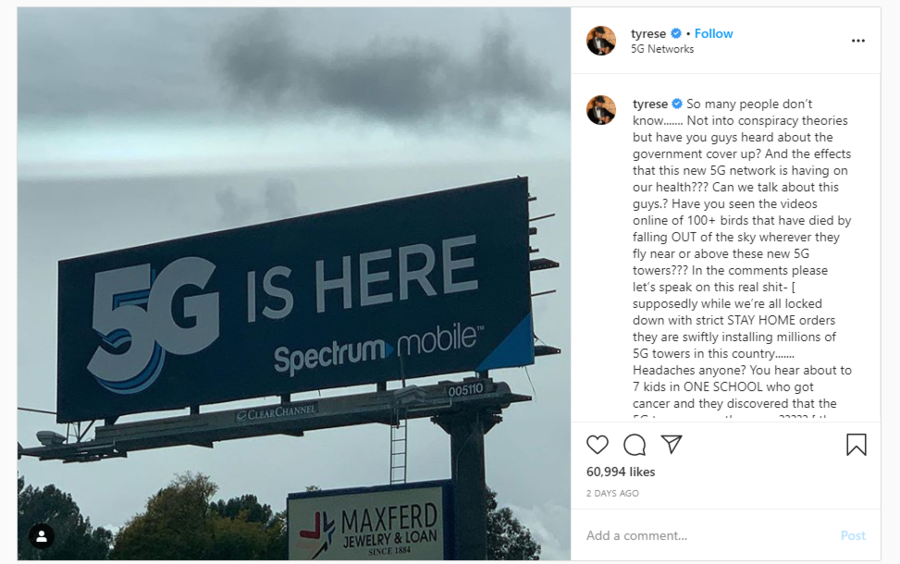 Tyrese said he's "not into conspiracy theories," but he filled his post with a flurry of false rumors and suppositions.

Lead Stories has previously debunked claims that 5G radiation has killed birds in the Netherlands, ducks "everywhere," and a flock of birds outside the NASCAR Hall of Fame in Charlotte, North Carolina. As we have reported several times, the National Audubon Society has rejected these assertions:

No, 5G--the fifth generation of our mobile cellular network--does not kill birds. "Radio wave emissions above 10 MHz from radio transmission antennas (including cell telephone towers) are not known to harm birds," says Joe Kirschvink, a biophysicist at the California Institute of Technology who specializes in magnetics, in an email.

The post also suggested that 5G has a deleterious impact on public health, a claim that has also been rebuffed:

Despite this, there is no solid evidence that 5G - or any mobile communications network - can have a harmful effect on human health. The upgrade is based on similar technology to preceding mobile networks, and so far no study has found a link between mobile phones and cancer, although research into the area is ongoing.

Tyrese also referred to a report about several childhood cancer cases at a school. On April 4, 2019, CBS News reported on how parents were concerned that a cellphone tower on the campus of an elementary school in Ripon, California, had exposed children to dangerous radiation.

Sprint shut down a cellphone tower on the campus of a California elementary school after some parents said it may be linked to several recent cases of childhood cancer. Those families at Weston Elementary School in Ripon claim the tower could have exposed their kids to harmful radiation.

However, about six months later, The Modesto Bee newspaper reported that tests found a carcinogen in the tap water at the school. The headline stated, "Maybe it wasn't the cell tower."

According to the Bee:

A chemical compound that is a known carcinogen was detected in the drinking water at Ripon's Weston Elementary School last March, during the same month parents were protesting a cellular tower as the possible cause of cancer cases among students.

Testing conducted for Ripon Unified School District in March found trichloroethylene (TCE) in the school's tap water. The city and state regulators have tracked TCE in the groundwater since a contaminated plume was linked to the former Nestle plant in Ripon, which for decades made decaffeinated coffee. The plant closed in 1994.

The TCE concentration was .56 micrograms per liter in a March 18 sample taken at Weston. That is above the level for reporting the drinking water contamination.

Regardless, Sprint bowed to public pressure and shut down the cellular tower.

Tyrese also said that 5G is part of a broader government cover-up, a claim that Lead Stories has previously called out as false.

To learn more about 5G, we consulted with Dr. Payam Heydari, Ph.D., a professor of electrical engineering at the University of California, Irvine, who said that health concerns about the high-speed network are unfounded:

People should not be really concerned for the following reasons: despite the fact that these wireless companies such as Verizon, AT&T and the backbone hardware companies, such as Apple, Broadcom, Qualcomm, they're advertising that 'Oh, 5G is totally new, it's nothing compared to 4G or other standards,' let me tell you what. When it comes to user-to-user communication, there is not much difference really when it comes to the frequency usage. The bandwidth per user will increase, of course. But there is not much difference. Think about it: the big semiconductor and high-tech companies are not ready to completely revolutionize the wireless infrastructure by just abandoning the (existing) cell phones and just use another completely different cell phone.

The post joins a growing list of 5G-related conspiracy theories that are being shared to scaremonger the public. You can read more of our fact checks on the topic here: