Does breast milk "leakage" contain "all the impurity that's in the mother's body"? No, that's not true: "This claim is false and is not grounded in science," Dr. Christopher M. Zahn, chief of clinical practice and interim chief of health equity and quality for the American College of Obstetricians and Gynecologists, told Lead Stories. Nursing mothers do not secrete "leakage" breast milk that is different from their normal breast milk, which does contain impurities if they are in the diet of the mother, multiple experts said. 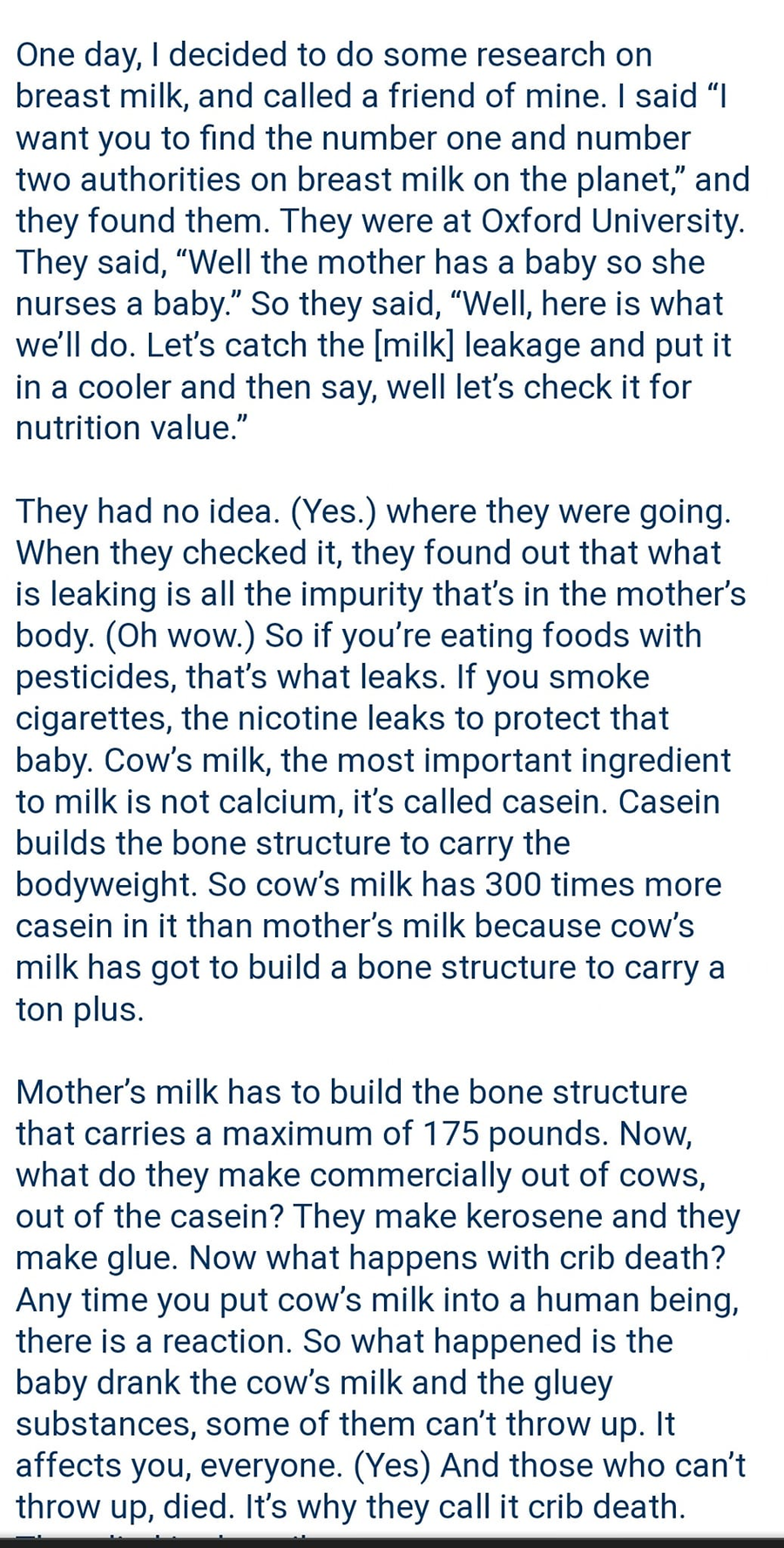 The image in the Facebook post is a quote from the late Dick Gregory, a comedian, civil rights activist and self-described "wellness guru." He became a vegetarian activist and claimed that herbs and natural treatments helped him fight cancer for many years. Gregory made the comments about breast milk in 2011 to the Supreme Master Television show.

One day, I decided to do some research on breast milk, and called a friend of mine. I said 'I want you to find the number one and number two authorities on breast milk on the planet,' and they found them. They were at Oxford University. They said, 'Well the mother has a baby so she nurses a baby.' So they said, 'Well, here is what we'll do. Let's catch the [milk] leakage and put it in a cooler and then say, well let's check it for nutrition value.'

They had no idea. (Yes.) where they were going. When they checked it, they found out that what is leaking is all the impurity that's in the mother's body. (Oh wow.) So if you're eating foods with pesticides, that's what leaks. If you smoke cigarettes, the nicotine leaks to protect that baby. Cow's milk, the most important ingredient to milk is not calcium, it's called casein. Casein builds the bone structure to carry the bodyweight. So cow's milk has 300 times more casein in it than mother's milk because cow's milk has got to build a bone structure to carry a ton plus.

Zahn dismissed the claims made by Gregory via email on May 26, 2022:

This claim is false and is not grounded in science. The spread of medical misinformation, myths, and fallacies is harmful for patients. People seeking information about their health online should refer only to reliable sources. Just because information is online or on social media doesn't mean that it is true, or based on any reliable medical evidence. It is a sad reality that some people intentionally disseminate false information or simply decide to share unproven medical allegations without confirming the truth.

Heather Ludwig, who is an international board certified lactation consultant at OSF HealthCare, pointed to the Drugs and Lactation Database (LactMed) from the National Library of Medicine that explains in depth how medicine transfers in breast milk. She told Lead Stories via telephone on May 25, 2022, that breast milk does not switch to a method of leaking only toxic substances:

Dr. Alison Stuebe, who is director of the Division of Maternal-Fetal Medicine at the University of North Carolina School of Medicine, spoke with Lead Stories via telephone on May 26, 2022. She dismissed the idea of breast milk "leakage" having only impurities and explained why there isn't a "separate kind of milk":

Usually after the first couple of months people nurse on one side and they don't have a bunch of leakage on the other side. but that's just let down, which is the process through which the hormone oxytocin causes milk that's in the breast to be pushed out the level of the nipple areola where the baby can get it,

Stuebe, who is the past president of the Academy of Breastfeeding Medicine, said there are toxins in breast milk because it "reflects the diet" of the breastfeeding mother:

It's not that those toxins are concentrated in breast milk to the exclusion of everything else. But if we move through the world and are exposed to toxic fat soluble substances, and they're in our bodies and they're therefore in a baby in utero and they also would potentially cross into milk.