Was the May 2022 Texas school shooting a "false flag"? No, there's no evidence that's true: A false flag is an operation, or attack, that's made to look like it was carried out by someone other than the person who is responsible. Authorities have identified Salvador Ramos as the shooter. He is believed to have acted alone, according to a local police chief.

The claim appeared in a Facebook post on May 25, 2022. The post includes a series of images: Some show a Freemason symbol and one seems to question the timing of the May 24, 2022, shooting, just a few days before the start of the annual meeting of the National Rifle Association (NRA). The post opens:

Project Deep Dream, CIA Opps (The Biggest Opp), Freemasons abound...
Time To Dig For Ramos's therapist.
In 2018. Different Ramos, way too big of a coincidence.
This time, Salvador Ramos.
Well I'd say this one definitely showed signs of mental health issues!
All when Governor Abbott, Senator Cruz, and PRESIDENT Trump were scheduled to speak at an NRA meeting in 3 days?
Well, I've smelled fishy before, but THIS stinks to HIGH HEAVEN! 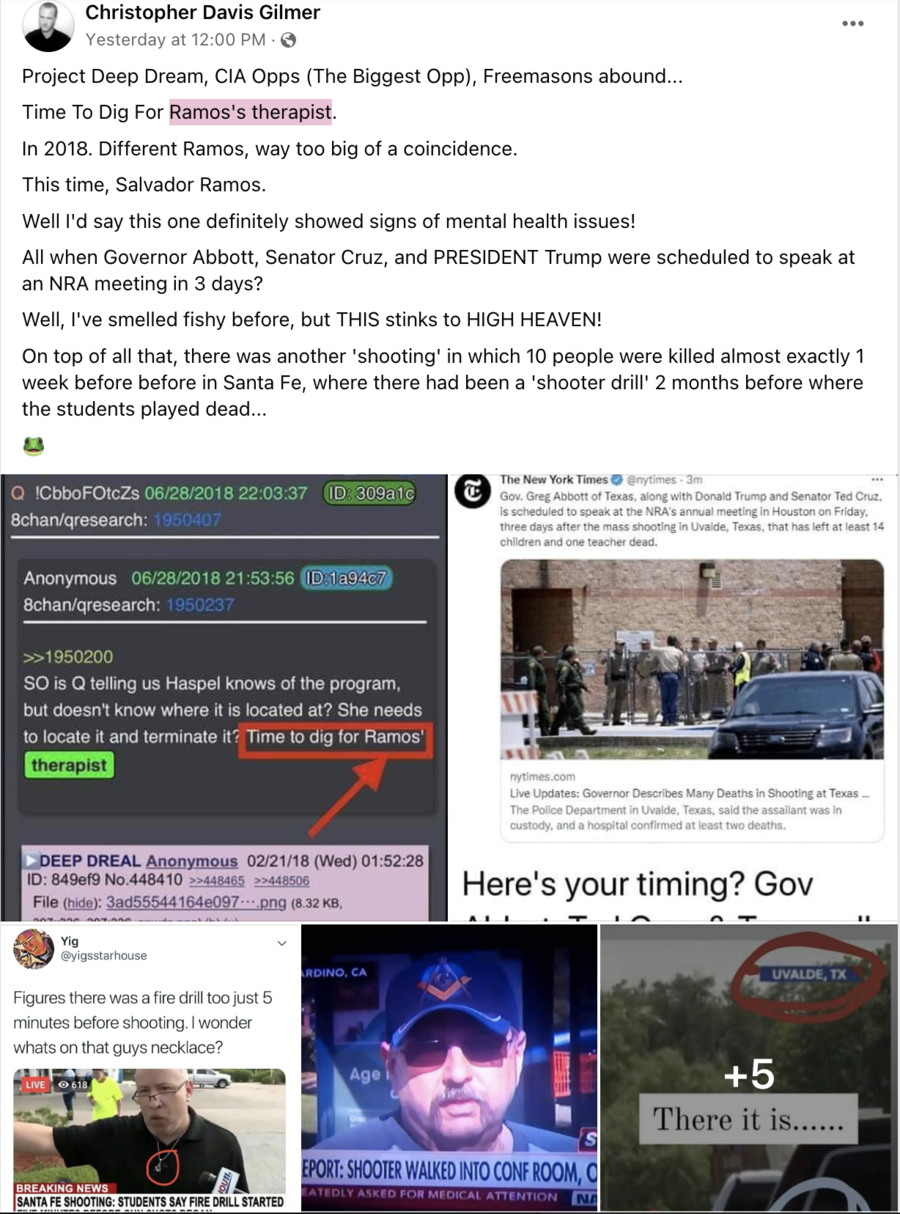 Although it's not completely clear what the post is alleging, it seems to be saying that the shooting in Uvalde, Texas, was a CIA or Freemasons operation, dubbed "Project Deep Dream," designed, at least in part, to impact the NRA annual meeting set to take place in Houston on May 27 to May 29, 2022.

There is absolutely no proof that's true.

The false flag claim is common in the wake of mass shootings. Lead Stories has previously debunked allegations that the shootings in spas and massage parlors in Atlanta and at a grocery store in Boulder, Colorado were false flag operations meant to push gun control through Congress. Those stories can be seen here and here.

In the case of the Texas shooting, authorities have identified the gunman as 18-year-old Ramos. He died at the scene of the attack, which claimed the lives of 19 students and two adults. According to Pete Arredondo, chief of police for the Uvalde Consolidated Independent School District, Ramos is believed to have acted alone. There is zero evidence that he worked on behalf of the CIA, Freemasons or any other organization.

On top of all that, there was another 'shooting' in which 10 people were killed almost exactly 1 week before before in Santa Fe, where there had been a 'shooter drill' 2 months before where the students played dead...

That's not true. The school shooting in Santa Fe, Texas, happened four years ago in May 2018, not May 2022, as can be seen in these news reports.