Does Balchem Corporation, a company with white leadership, own a trademark of the word "Juneteenth"? No, that's not true: Although Balchem submitted an application to trademark the word, that application was dead by the time this claim was made. Juneteenth is a federal holiday that recognizes the emancipation of all enslaved Black people in the United States.

The claim appeared in a Facebook post on May 25, 2022. The post includes a "Trademark Overview" of the word "Juneteenth" and several pictures of Balchem's leadership. The caption reads:

JUNETEENTH has been trademarked and is owned by Balchem Corporation. I've taken the liberty of attaching a list of their board members. As you can tell from their profile picture... I said this was coming. I posted about it last year. This fuckn Country makes me sick to my stomach!!!!🤬
#profitoffofpain 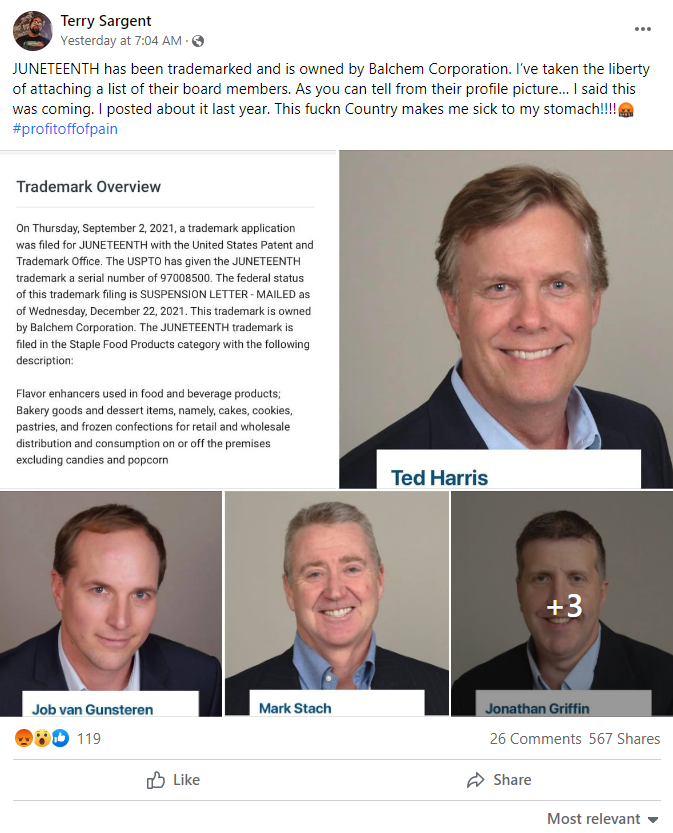 The trademark application submitted by Balchem for the word "Juneteenth," which has the serial number 97008500, can be found within the U.S. Patent and Trademark Office's trademark database. Although another social media post discussing the claim shows screenshots of when the trademark application was "Live," the status of the trademark application is listed as "Dead" at the time of writing. It was abandoned on May 23, 2022, two days before the post in this fact check was published. The stated purpose for the trademark was "Flavor enhancers used in food and beverage products; Bakery goods and dessert items, namely, cakes, cookies, pastries, and frozen confections for retail and wholesale distribution and consumption on or off the premises excluding candies and popcorn."

A screenshot from the trademark database about the "Juneteenth" trademark application is included below:

The trademark application was seemingly brought to public attention after Walmart was criticized for developing and selling ice cream named "Juneteenth" under its Great Value brand. The ice cream included red velvet and cheesecake flavors. Walmart apologized for the product launch.