Did a digital display screen at a Costco Wholesale gas pump display a message that said, "Don't blame us. Blame Joe Biden"? No, that's not true: This image has been edited.

The digitally altered image began appearing on Facebook on about May 27, 2022. One example was published with a caption:

The text of the display screens in the photo reads: 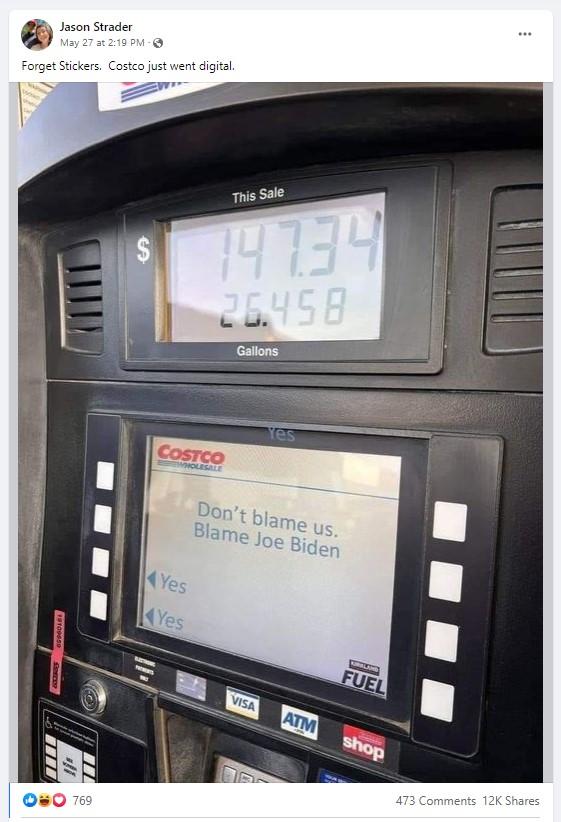 There are two small details that show this photo was digitally retouched.

Directly above the lower display screen, on the black frame, the word "Yes" is visible. This artifact was left behind accidentally by a person who was editing the word "Yes." who failed to notice one of the working layers was still visible when the retouched image was flattened to finish and save it as a new image.

The errant "Yes" isn't only out of place, it is out of place in the exact center of the image (below left). In some digital editing programs, when an element is copied and pasted, the program will automatically drop the element in the center of the workspace. Lead Stories experimented with the word "No" (below right) in the Gimp image editor and the copied word "No" was dropped in the same centered position over the word "Yes." The Adobe Photoshop program produces the same results: If an area of the image is selected and copied, the first time it is pasted it is dropped directly over the selection; but if it is pasted a second time, it is dropped in the center of the image. 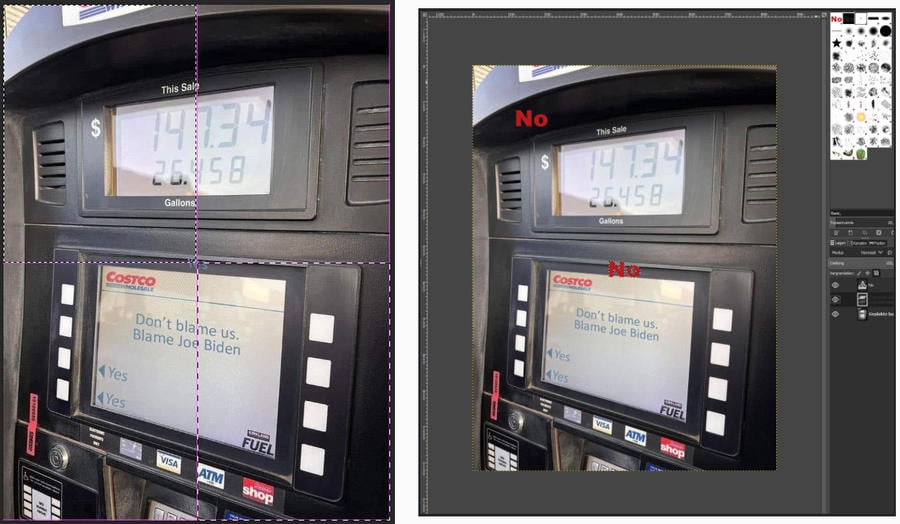 Adobe Photoshop has a tool that makes it easy to demonstrate a minor misalignment of the digitally added message. The perspective crop tool "crops an image to correct distortions caused by perspective." Each corner of a distorted rectangular area can be carefully selected from the image (below left) and Photoshop will then make a new image (below right). Lead Stories added a transparent red stripe to show the line where the text should be if it was aligned properly in the digital readout. The bottom edge of the "Blame Joe Biden" text is not formatted to the same perspective as the actual screen display.

Lead Stories reached out to Costco for comment on the claim, and the company responded by email on May 31, 2022, saying: "The Costco gas station post/image you are referring to is not affiliated with or approved by Costco."