Was Salvador Ramos, the shooter who killed children and faculty members at a Texas elementary school on May 24, 2022, an illegal immigrant? No, that's not true: Texas Gov. Greg Abbott said Ramos was a U.S. citizen and a state legislator said Ramos was born in the United States. 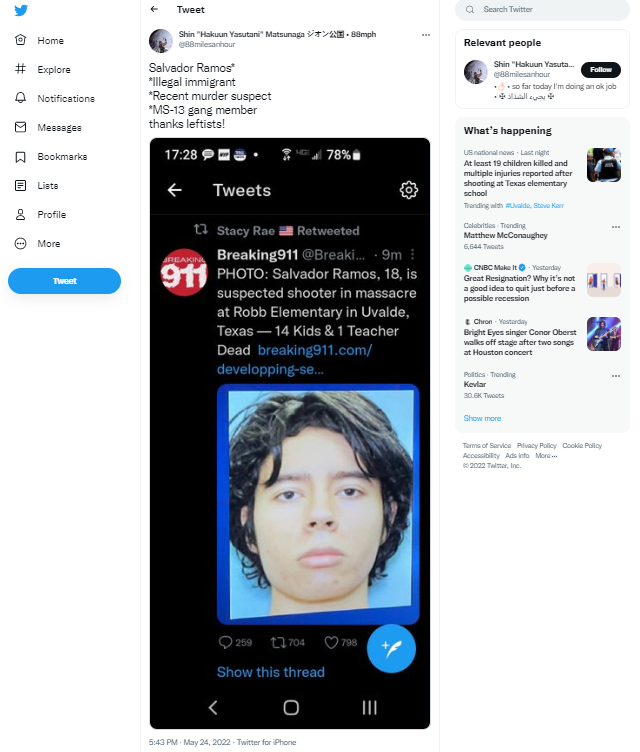 According to Texas state Sen. Roland Gutierrez, Ramos was born in North Dakota. Gutierrez' district includes Uvalde, the town in which the shooting took place.

During a press conference with Abbott and other Texas officials held on May 25, 2022, none of the officials said Ramos had emigrated to the U.S. illegally.

Lead Stories contacted the North Dakota Department of Health, which said it could not share birth records with us. We also reached out to the Texas Department of Public Safety and will update this story with any relevant response.

The illegal immigrant claim was also spread by U.S. House Rep. Paul Gosar, a Republican from Arizona. Gosar was responding to a tweet insinuating that the shooter may have been a part of a political demographic associated with Gosar. In the now-deleted response (archived here and here) tweeted on May 24, 2022, Gosar made unfounded assertions that Ramos was actually leftist, transgender and an "illegal alien." Lead Stories debunked claims about whether Ramos was transgender here and here.