Did a man make it public that he plans to go after Target stores in Phoenix, Arizona, that support the LGBT movement? Yes, the screenshot of a text message warning is real. A person who considers himself a professional internet provocateur made a video with another person that was posted online. In the video he threatened that in the month of June, Target stores, store managers, LGBT people, and their supporters "will not be safe," that he will be "going on hunting expeditions soon" across Arizona and Phoenix and this will be "next level stuff."

These threats have caused concern, an example of which can be seen in a text message warning that was shared as a screenshot on Facebook on May 25, 2022. The post was captioned, "Attention Arizona people, my friend just sent me this!" The text message exchange in the screenshot reads:

Today 1:11 PM
Stay away from targets for awhile plz 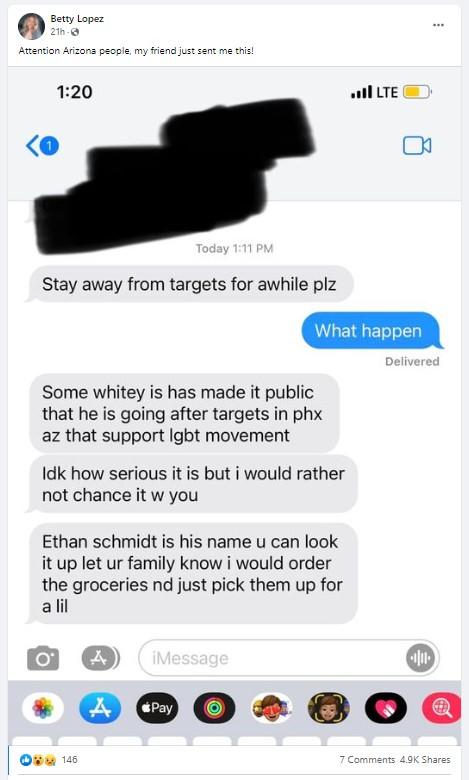 The composite image below shows screenshots of the two videos that were shared by the Twitter account @patriottakes, an account described as, "Dedicated researchers monitoring and exposing right-wing extremism and other threats to democracy." Patriottakes did not identify what platform the Ethan Schmidt videos originated or link to them. 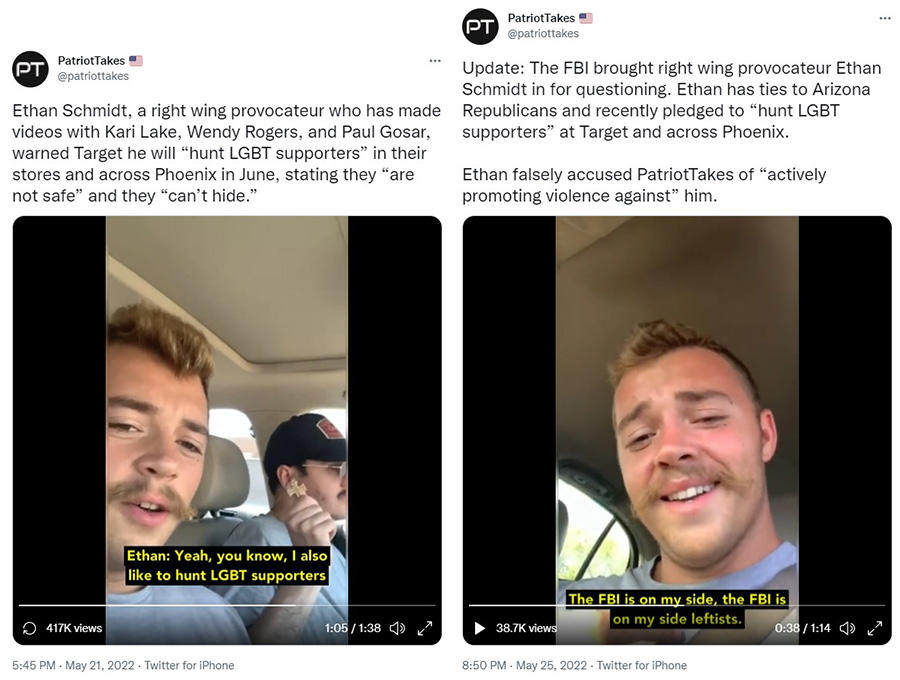 In the May 21, 2022, video shot inside a vehicle with another man, identified as Kyle Clifton, the man who identifies himself as Schmidt outlines vague plans for exposing Target and suggests that Target should ban him from all stores in the United States because "if you don't, we're going to be coming to every single one." He says they will be "pressing the managers," which apparently means to confront and harass a person while filming them and "making massive scenes" and "exposing every single one."

So Target we're giving you a heads up that you know are we coming after you hard. Hard. You know, I've already exposed you guys pretty good but you know, this is gonna be next level stuff.

In the second half of that video Schmidt begins to talk about "hunting" LGBT supporters.

In the May 25, 2022, video Schmidt claimed that the reason the FBI wanted to talk to him was because they were concerned about ANTIFA death threats against him, Schmidt also said:

Ethan Schmidt has several social media accounts where he celebrates multiple bannings and posts screenshots of press coverage where he has been mentioned. On May 25, 2022, soon after it was published, Schmidt posted a screenshot of the Phoenix Police Department tweet to his Instagram account @banethanschmidt (the original tweet is embedded below in this article) Schmidt wrote:

yeah defend the pride for kids u pedophiles . idk how u could feel safe supporting it.

Lead Stories reached out for comment to the FBI, the Phoenix Police Department and Target by email. A spokesman from the Phoenix FBI public affairs office replied on May 26, 2022, and conveyed that "the Phoenix Field Office is aware of the individual and the postings" and also that it is FBI policy to not confirm or deny the existence of status of any investigation.

The Phoenix Police Department is aware of a video on social media that names a large retail store. Our detectives are looking into this as part of an ongoing investigation.
We understand statements made in the video may be concerning to members of our community. The large retail store and their security team are also aware of the video and its contents.
We ask the public to contact the police if there is anything they observe that causes them concern or makes them feel unsafe.

The Phoenix Police Department published a tweet with a similar message:

We are aware of a video on social media that names a retail store. We are looking into this. Statements in the video may be concerning to members of our community. The store and it's security team are also aware of the video. If you see anything of concern please call #PHXPD. pic.twitter.com/2WB8Jk5Zbm

Lead Stories has not received a reply from Target at the time of publishing and will update this article if appropriate.