Does a Facebook video capture a scene showing Republican Sen. Lindsey Graham of South Carolina demanding that FBI Director Christopher Wray disclose the name of the person who ordered the raid of Donald Trump's residence in Florida? No, that's not true: The clip simply doesn't contain the exchange promised in its headline.

The attached video opened with a shot of Lindsey Graham saying:

Well, number one. Violence is not the answer to any political problem. We have institutions in this country, and there is a lack of faith in many of them for a reason. But here is what I would say. I would say that we need to go to the ballot box to take out our frustration, that Republicans like myself... You know, I supported the Mueller investigation ...

What did I learn from the Mueller investigation: the FBI --- when it comes to Trump -- lost their way. This unending desire to destroy Trump and his family is frustrating. 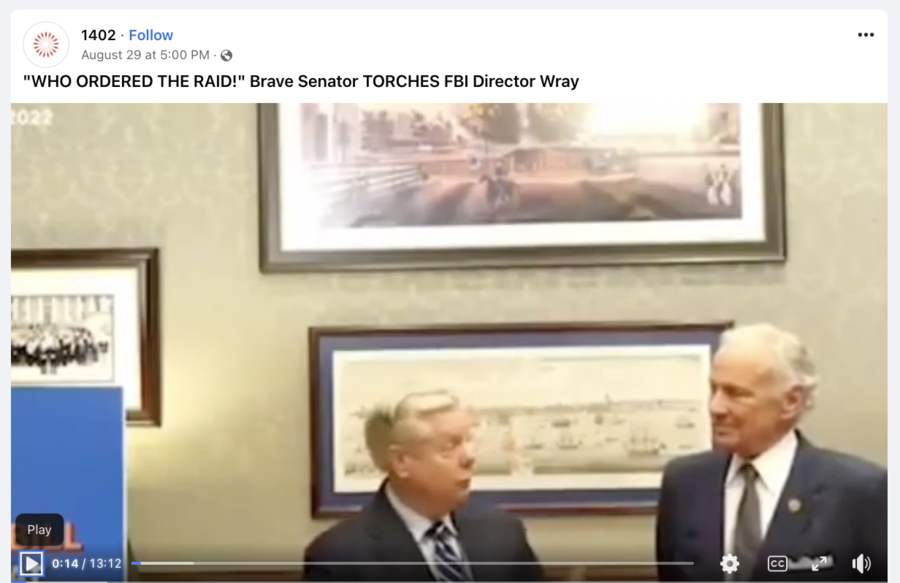 These were the shots from Graham's joint press conference with South Carolina Gov. Henry McMaster centered on the Inflation Reduction Act, with no FBI speakers involved in the appearance. Graham's remarks about the FBI came out as an answer to one of the questions. But the Robert Mueller investigation into Russian interference in the 2016 presidential election, mentioned by Graham, ended in 2019, more than three years before the search of the Mar-a-Lago properties.

FBI Director Christopher Wray doesn't appear in the video until the 2:56 mark. That fragment shows a judiciary committee hearing on China, Afghanistan and other security-related topics. The full recording of the event was posted on Graham's verified YouTube account on August 4, 2022, four days before the Mar-a-Lago raid. Thus, the senator could not discuss the consequences of the search before it took place.

It's noteworthy that the Facebook video appeared on the page of @1402Russia, with the word "Russia" being consistently omitted from the name of the source in all group's videos: