Did Max Loughan, a 13-year-old who gained fame in 2016 for creating an "energy harvesting device," disappear for "about six years"? No, that's not true: There's no evidence that Loughan was or is missing or hiding. A video posted by his school, Tahoe Expedition Academy, shows him giving his senior passage presentation in 2021, and his school also posted an article about him on its website. In a TikTok video published on December 17, 2022, Richard Greene, a journalist and communications expert who "discovered" the boy in 2016, said he talked to Loughan's mom and "He's very much alive."

The claim appeared in an Instagram post and video published by Toilet Time TV on December 28, 2022, under the title "Where is Max Loughan?" It opened: 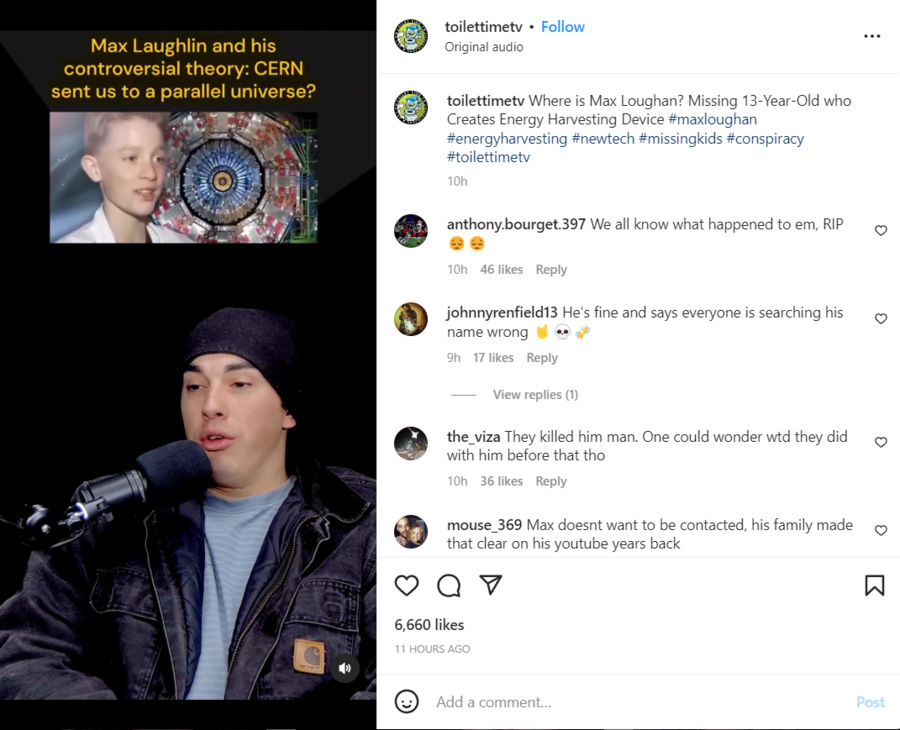 The nearly minute-long clip is from an online video channel called Toilet Time TV which says it explores "a plethora of topics with a touch of satire." The channel says in its description, "Join us at the bottom of the rabbit hole. Sit back, relax, and enjoy the royal flush." The original 50-minute show aired on December 22, 2022.

In the Instagram clip, one of the hosts starts by mispronouncing Loughan's last name as Dougan. The host says:

Everybody wants to know where Max Dougan is. Now, Max, if you're out there ... reach out to us. We'd love to have you on our show. Your last upload to the world was about six years ago when you were 13 years old ... and now you would be 19, I guess.

A graphic inserted in the video at the same time also shows the name spelled incorrectly as Laughlin (in the red box below): 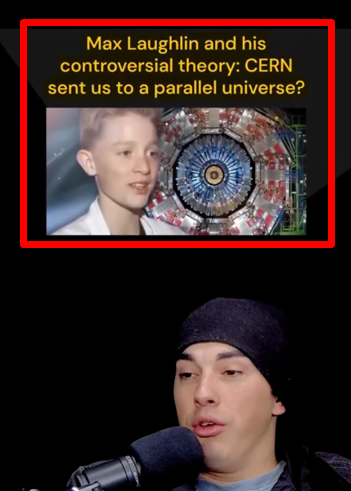 The two hosts on Toilet Time TV talk about Loughan's work with one of the hosts saying it was about "using cosmic energy to power a city for a long duration of time ... everybody wants to know where Max Dougan is."

After some back-and-forth talk between the two hosts, the second host says to his partner, "So what you're saying is the mystery behind it is that he made these claims ... and nobody can find him anywhere."

Loughan began to gain notoriety in 2016 when Greene live-streamed to Facebook the then-13-year-olds' presentation about his "energy device." A Greene interview with the teen from July 22, 2016, at the United Nations, was watched 2 million times. That conversation appears below:

KTVN published a story about then-13-year-old Loughan on the TV station's website. The station also added a video of the story to its Facebook page:

Addressing the speculation about Loughan being missing, Greene released a TikTok video on December 8, 2022. In it, he said:

As far as I know, I haven't spoken to him in a little while, but as far as I know, he and his brother and his parents are just fine. If there's an opportunity to do some more videos with Max, I will certainly let you know. So, follow me and you can find out if that happens. I will be contacting him because I've been seeing all the buzz on this.

The complete video appears below:

A day later on December 9, 2022, Greene said in a second video that he had reached out to the family and was awaiting a reply:

I know there's a huge amount of interest in Max. I'll give you a quick update. I've reached out to him and his brother, his mother and his father, and I will hopefully hear from them very soon. They're usually pretty responsive. Last time I did speak to anyone in the family was about six weeks ago and everything seemed fine.

The second video appears below:

And in a third video from December 17, 2022, Greene said he was able to reach the family. He said:

The third video appears below. Greene's comments about Loughan start about 30 seconds in:

Green said he hoped to talk to Loughan, who turned 20 in November 2022, soon and possibly do a special Zoom workshop that people could watch.