Did Twitter remove "over 44,000 Twitter pages involved with child sexual exploitation -- in just India alone" since Elon Musk took over the company? No, that's not true: Such large numbers came from global totals, not from India alone. Also, while the implication in the post is that such numbers began with Musk's takeover of Twitter, available information shows it was not rare for Twitter to delete more accounts in the category of child sexual abuse in months before the beginning of Musk's tenure.

The claim originated from a tweet published on December 20, 2022 (archived here), which opened:

What has really been going on behind the scenes at Twitter? Why was the situation allowed to get this out of control in the first place? 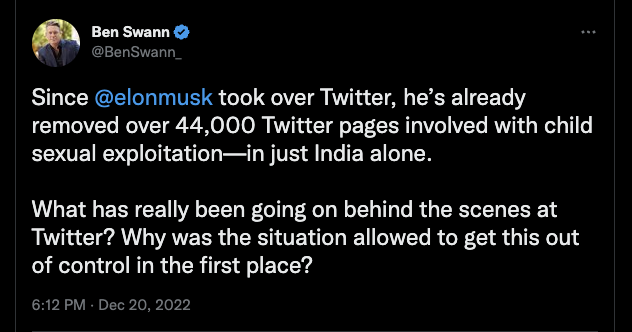 But both takes appear to be based on misread data.

Transparency reports Twitter publishes in India list the global totals of accounts removed due to company monitoring but do not break them down by country. These reports also contain information on suspensions initiated by local Indian courts, but those numbers rarely reach a three-digit figure per category within a one-month cycle.

The most recent Twitter report for India covers the period between October 26, 2022 and November 25, 2022. Musk's tenure as CEO began on October 28, 2022, following months of negotiations.

The India-specific data from the grievance officer "includes complaints received from individual users with accompanying court orders." However, it is not entirely clear whether this section is limited to those with court orders or not. For the said period, the report shows no removed links or accounts associated with child sexual exploitation: 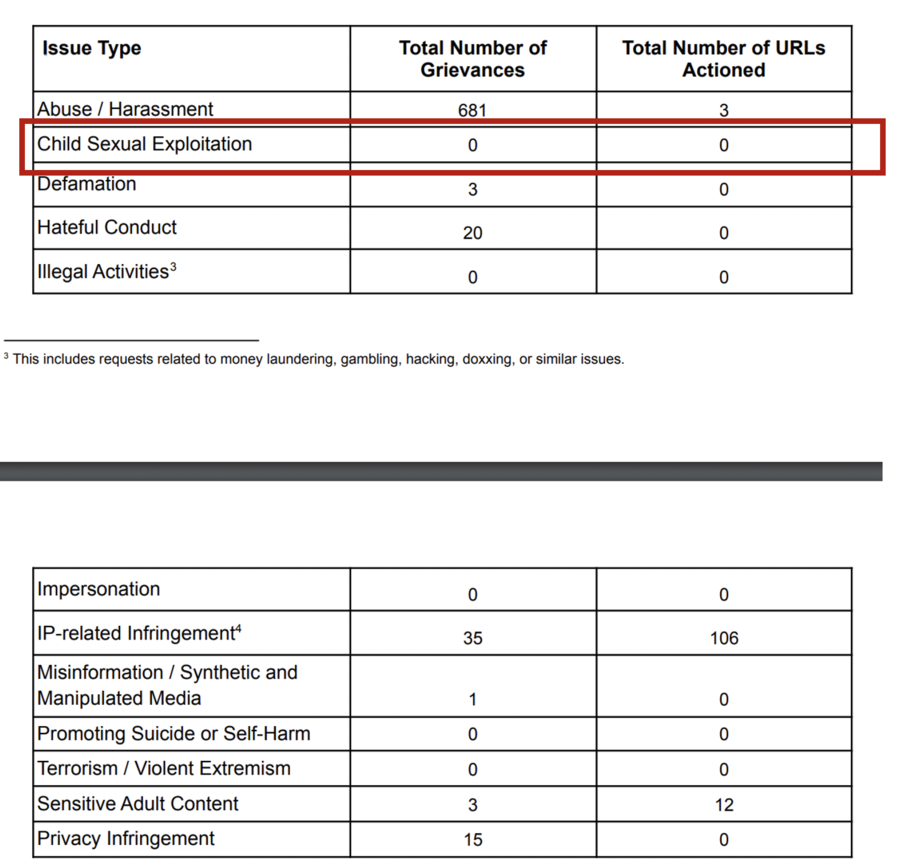 The same report takes a much broader approach with other data that includes child sexual exploitation.

The report does not show India-specific data on that, but it shows a global total of 45,589 accounts that were suspended for "child sexual exploitation, non-consensual nudity, and similar content." There is a footnote with that number:

This data represents global actions taken, and not just actions related to content from India

Unlike the India-specific data, which is based on "complaints received from individual users with accompanying court orders," Twitter writes that "a vast majority of all accounts that are suspended for the promotion of terrorism and child sexual exploitation are proactively flagged by a combination of technology and other purpose-built internal proprietary tools." In other words, from internal monitoring instead of user complaints.

A previous report, covering the period from September 26, 2022, to October 25, 2022, shortly before Musk's takeover, follows the same structure: the India-specific data from the grievance officer and global total for "proactive monitoring data." These sections, respectively, show zero India-specific links Twitter acted on as a result of complaints regarding child sexual exploitation and 44,611 accounts that were deleted globally in the category that includes child sexual exploitation, along with "non-consenual nudity and similar content."

The available data does not support the idea that Twitter under Musk is significantly more effective at removing the content associated with child sexual exploitation than before he took over the company.

Such reports are not available for all countries, but in India, Twitter must publish them to comply with local laws.

Other Lead Stories fact checks about Twitter can be found here, here, here and here.