Does a picture of hospitalized Damar Hamlin with a disconnected IV line raise valid questions about his condition or medical treatment after a reported cardiac arrest on January 2, 2022? No, that's not true: The tube in Hamlin's arm shown disconnected from IV lines does not contradict his widely reported diagnosis. As the director of a nurse practitioner program told Lead Stories, it's standard practice.

The claim appeared in a tweet (archived here) published on January 10, 2023. It said:

Im not familiar with hospital protocol, but would they not have his IV hooked up? 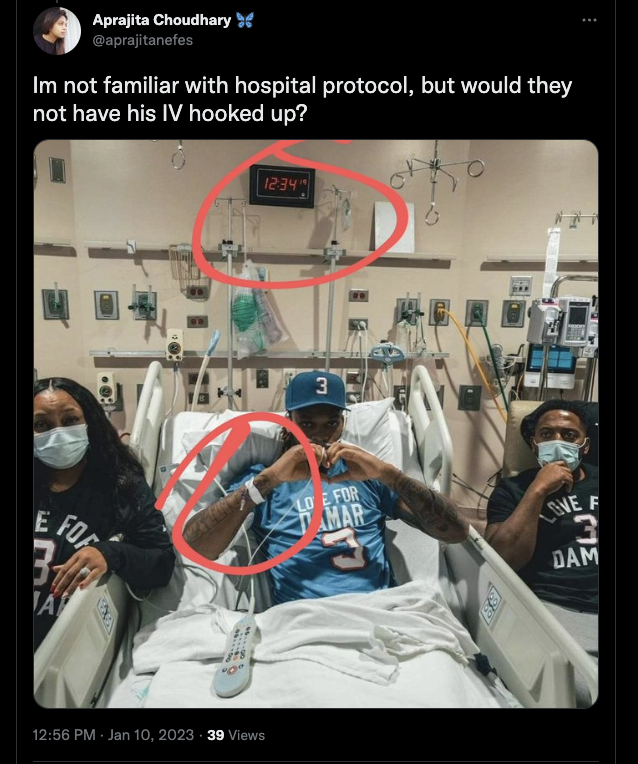 Since the health emergency of the 24-year-old Buffalo Bills football player occurred during a game on January 2, 2023, it received continuous media coverage as the situation unfolded. The picture was first published in Hamlin's verified account on Instagram on January 8, 2023, under the caption "GAMETIME @buffalobills LFG!!!!!!"

The claim, implying that the image and possibly Hamlin's condition was faked, was first made in a post published on Facebook on January 8, 2023. That day, Hamlin was in the process of being transferred from an Ohio hospital to Buffalo General Medical Center/Gates Vascular Institute in Buffalo, New York. The post was deleted, but Lead Stories saved a screenshot: 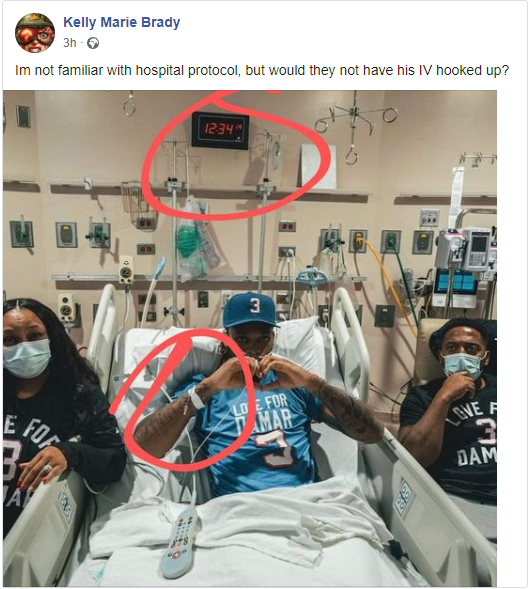 The tweet that is the focus of this fact check uses exactly the same text, including missing the apostrophe in "I'm," and the same red circling as the Facebook post.

As of this writing, nothing indicates that the picture in question either proves a violation of some medical protocols or suggests that the situation was staged.

On January 11, 2023, when Hamlin was released from the Buffalo hospital too, the facility issued a statement that said, in part, that "cardiac, neurological and vascular testing" was a part of the medical evaluation.

Mary Brennan, the director of the Adult-Gerontology Acute Care Nurse Practitioner Program at NYU Rory Meyers College of Nursing and a nurse caring for hospitalized patients with cardiovascular illnesses, told Lead Stories via email on January 12, 2023:

While a 'picture may be worth a thousand words', a photo may not provide all the information a reader desires and may give rise to misinformation as a result.

Some readers have questioned the appearance of a small catheter on or near Damar's right wrist which is not attached to IV tubing. This appears to be a peripheral vascular access device, or a small catheter, previously referred to as a heparin adaptor, or heparin lock, but now more commonly called a saline lock. This catheter is placed in a small vein and provides a route for nurses and physicians to administer intravenous fluids or medications, such as antibiotics or emergency medications, if necessary. If not in use, the catheter is capped. Typically, saline locks are secured in place with tape, as this catheter is, however, it looks like it needs to be better secured.

The purpose of a peripheral IV with a saline lock is to prevent repeated needlesticks. The peripheral IV with a saline lock provides a route for nurses and physicians to administer intravenous fluids or medications, such as antibiotics or emergency medications, if necessary. If not in use, the peripheral IV is capped as it is in the picture. Typically, saline locks are secured in place with tape, as this catheter is, however, it looks like it needs to be better secured. They are changed every 5 to 7 days or as needed.

Medical guidance confirms that peripheral IVs don't have to be constantly connected to IV lines because this kind of treatment takes into consideration not only the amount of the needed medicine but also the length of the intake, and that may vary. In other words, some patients get breaks from it.

Here is a close-up of what it looks like: 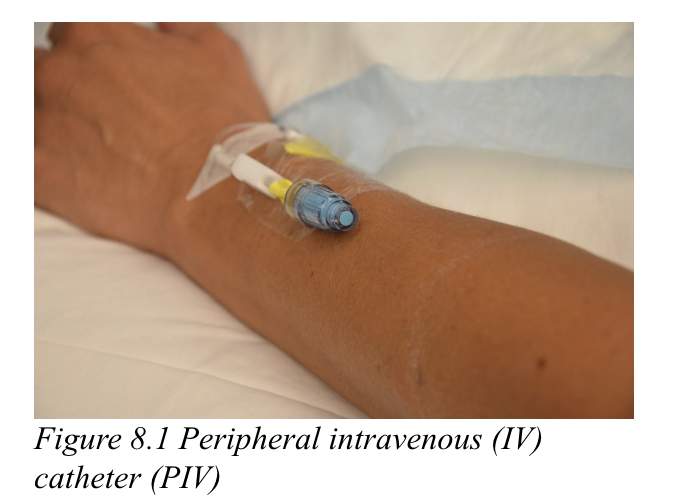 This is not the first claim that questions the circumstances of Hamlin's hospitalization. Lead Stories has already debunked two stories questioning the details about the ambulance that arrived at the scene.