Does the combination of hydrogen peroxide and iodine cure respiratory ailments when used as a makeshift medication in a nebulizer? No, that's not true: An emergency medicine toxicologist at the non-profit National Capital Poison Center told Lead Stories that such a practice is "unsafe." A U.S. Food and Drug Administration (FDA) spokesperson further verified that this claim is false as the nebulization of hydrogen peroxide and iodine is not at all FDA-approved.

The video that makes the claim about combining hydrogen peroxide and iodine in a nebulizer is from a show whose founder is known for publishing conspiracy theories.

The claim appeared in a Reel on Facebook on January 16, 2023. The caption says:

Below the video of a man sitting behind what appears to be a news desk with the word "INFOWARS" written on it is text that reads: 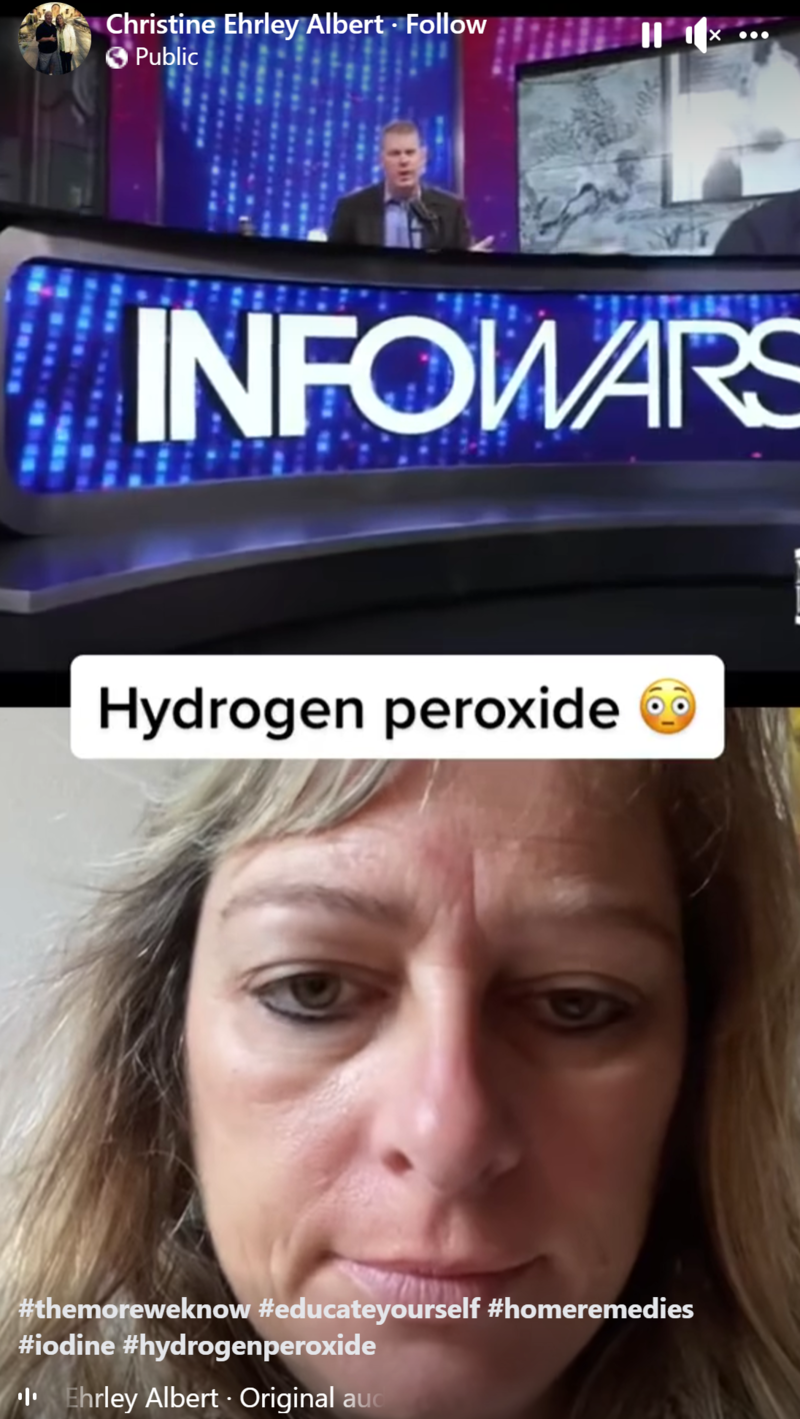 In this Reel, a woman records herself reacting to a video of a man using an essential oil diffuser -- not a nebulizer -- to combine the liquid forms of hydrogen peroxide and iodine. The man says the mixture will purportedly coat the lungs to combat "pathogens in the body," cure a sore throat, "relieve symptoms overnight" and ultimately cure all respiratory ailments.

The man in the video appeared on the show "Infowars." The Library of Congress' online archive defines "Infowars" as a "far-right American conspiracy theory and current events news website owned by Alex Jones and founded in 1999." The Southern Poverty Law Center describes Alex Jones as "the most prolific conspiracy theorist in contemporary America," the founder of the "far-right radio and internet conspiracy website Infowars," where his "most notable conspiracies revolve around national tragedies and terrorist attacks he labels as 'false flag' operations."

In an email to Lead Stories on January 19, 2023, Dr. Kelly Johnson-Arbor, a board-certified physician in emergency medicine and toxicology at the National Capital Poison Center, a non-profit organization in Washington, DC, explained that, when inhaled, hydrogen peroxide and iodine are respiratory irritants:

Darcy O'Brien-Genrich, a registered respiratory therapist and manager of respiratory care at Nebraska Medicine, a healthcare network associated with the University of Nebraska Medical Center, similarily told Lead Stories in a January 19, 2023, email that the video's claim is false:

During these times where false information continues, nebulizing iodine and hydrogen peroxide would be toxic and harmful to the lungs - especially if someone has a known or unknown allergy to iodine.

We, as respiratory therapists, only recommend nebulized medications by the FDA that are proven safe and effective in maintaining lung health.

In a January 25, 2023, email, an FDA spokesperson also confirmed for Lead Stories that this claim was false:

In an October 8, 2021, Nebraska Medicine article, medical toxicologist Dr. Ron Kirschner said that gargling iodine can cause a toxic reaction since it is not meant to be used internally at all. Inhaling hydrogen peroxide can cause a direct tissue injury in the human body, Kirschner added.