Does a video shot from a helicopter show an airborne machine gun assault, either just before or after the January 5, 2023, arrest of the son of "El Chapo" Guzman, Ovidio Guzman Lopez? No, that's not true: Some of the footage circulating is more than a year and a half old -- posted on Facebook on August 21, 2021. Additional footage (showing Guzman Lopez's first capture) dates back to October 17, 2019, when he was caught and then released after violence in the streets.

A tweet (archived here) containing three short videos was published on January 5, 2023, with the caption "El chapo son was arrested and the cartel getting busy to get him out they custody."

There was also a text caption included with one of the video clips that reads:

The Mexican Army has been deployed to Culiacan, Sinaloa after the arrest of Ovidio Guzman son of drug lord El Chapo. Fighting has escalated dramatically between the Sinaloa cartel and the Mexican government. residents are being urged to stay home. 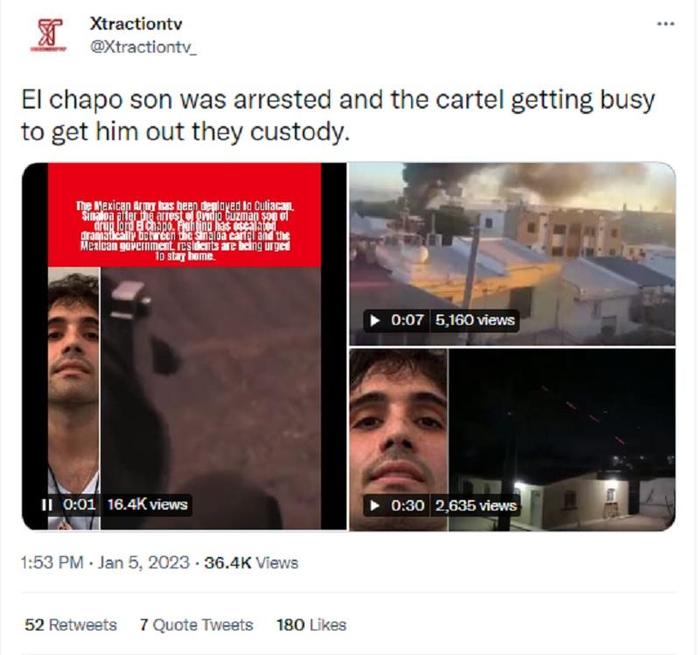 The video that appears on the left side of the screenshot above was posted on Facebook on August 21, 2021, by the page Venta de equipo Tactico (Sale of tactical equipment). The video shows a machine gun firing from a helicopter and is titled "INFANTERIA DE MARINA" which translates as "Marine Corps." This is how that post appeared at the time of writing:

Because this machine gun video has been online since 2021, it is not possible for it to depict the 2023 events in Culiacan, Sinaloa. 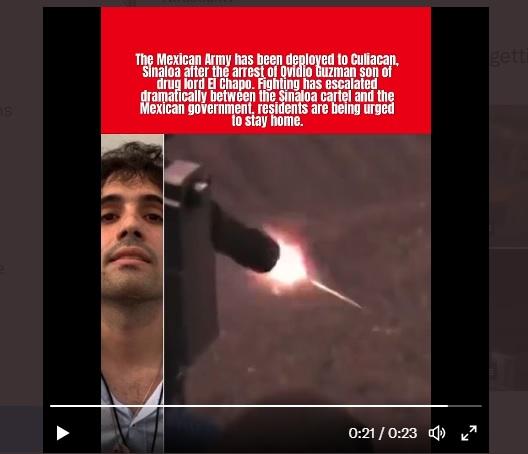 The photo of Guzman Lopez that appears in the sidebar (above) of each of these videos is not a photo from his 2023 arrest. This photo, and additional video footage circulated currently by many news outlets, dates back to October 2019, when Guzman Lopez was captured and detained, then shortly after released when violence erupted in Sinaloa.

The Los Angeles Times, whose video is embedded below, also wrote about the capture in 2019. This video was posted to YouTube by the LA Times on August 30, 2019.

This 2019 footage has resurfaced in current reporting on the January 5, 2023, arrest. In some cases it has been identified as old footage, such as by Reuters, but not always.

A video published by ABC News on January 5, 2023, for example, does not clarify that its images of Guzman Lopez are from 2019.