Will the face of Walt Disney replace Benjamin Franklin on the $100 bill in 2023? No, that's not true: Neither the Walt Disney Company nor the U.S. Department of the Treasury has announced such a change as of January 23, 2023. The article that announced the purported change to the $100 U.S. note was made on a satirical website whose "About" page says, "... you can be assured that anything you read here is not true, real, or accurate."

The claim originated in an article published to the satirical website Mouse Trap News on October 20, 2022 (archived here), titled, "Walt Disney Taking Over The $100 Bill In 2023." An introduction to the article read:

The $100 bill is by far the most popular currency denomination in America. It's not the most commonly used bill, however it consistently ranks as America's favorite bill. Oftentimes people call them "Benjamins" or "Bennys" after Benjamin Franklin, who is featured on the $100 bill. However, in 2023, there will be a new face on the front of the $100 bill and a new back to it as well.

Here is how the article appeared at the time of this publication: 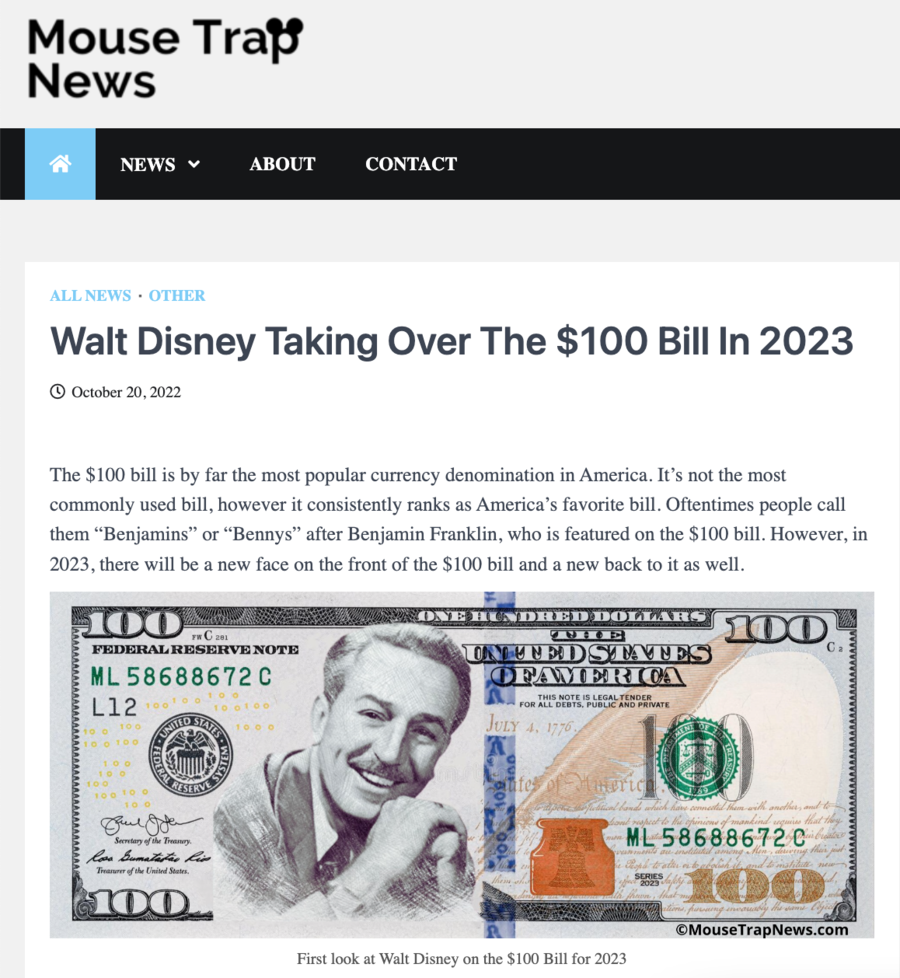 ... the world's best satire site. We write fake stories about Disney Parks stuff. From Disney Park announcements to Disney Hotel and resort news to made up Disney partnerships, you can be assured that anything you read here is not true, real, or accurate, but it is fun. So technically our slogan The Moused Trusted Name in Disney News isn't true, but we thought it was creative and funny, so we are running with it. ...

... While you read our articles, be sure to keep your hands, arms, feet, and legs inside the vehicle at all times and remember these are strictly fictional for your enjoyment. Please share any articles you enjoy reading with your Disney friends and on social media to help us grow and continue to put out fun articles.

After it was originally published in October 2022, the claim was widely shared several months later when the website DisDining published an article titled, "Walt Disney to Replace Benjamin Franklin on the $100 Bill: Report" on January 21, 2023 (archived here). Below is a screenshot of the article as it appeared at the time of this writing: 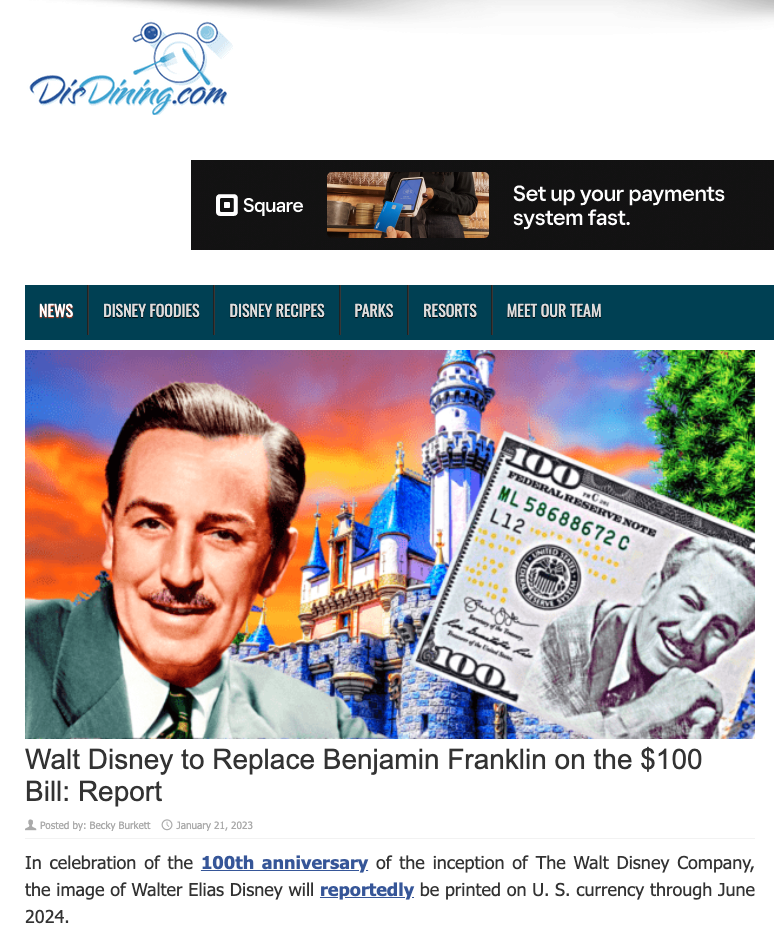 In the seventh paragraph of the DisDining article, the writer also acknowledged that the news originated with a satirical report:

In light of the celebratory festivities, U. S. currency will reportedly feature the likeness of the man behind the mouse and the magic, Walt Disney. According to a satirical report, Mr. Disney's image will be featured on the $100 bill, in place of Benjamin Franklin, beginning this month. Walt's image will be printed on the $100 bill through June 2024, at which time, Franklin's likeness will begin to be printed again.

A search through both the U.S. Department of the Treasury and the Walt Disney Company archives did not return any news releases or statements announcing such a change. Lead Stories contacted both entities for comment on the matter and will update the article should we receive a response.