Did a computer-generated (CGI) hologram that looked like President Joe Biden appear before a group of reporters and take questions before walking across the lawn and boarding Marine One? And is this the only logical conclusion to explain why Biden's hand appeared to drift through a reporter's microphone in a glitchy way in one recording of the scene?

No, that's not true: Many eyewitnesses with video and still cameras witnessed and have records of Biden's brief exchange with reporters as he walked from the White House to Marine One on March 16, 2021. There was nothing out of the ordinary. The glitchy effect of his hand near the microphone appears in one video and was caused by perspective and the way that compressed videos sometimes struggle with the appearance of fuzzy objects.

An almost-two-hour-long Dark Outpost video by David Zublick appeared on March 18, 2021, on the website videobanned.nl. The video resurfaced two months later as a looping Facebook Live broadcast that went on for eight hours. The video (archived here) was published by "Philippine Authentic Shop" on May 18, 2021, under the title "Dark Outpost 05-19-2021 Biden Is Computer Generated." 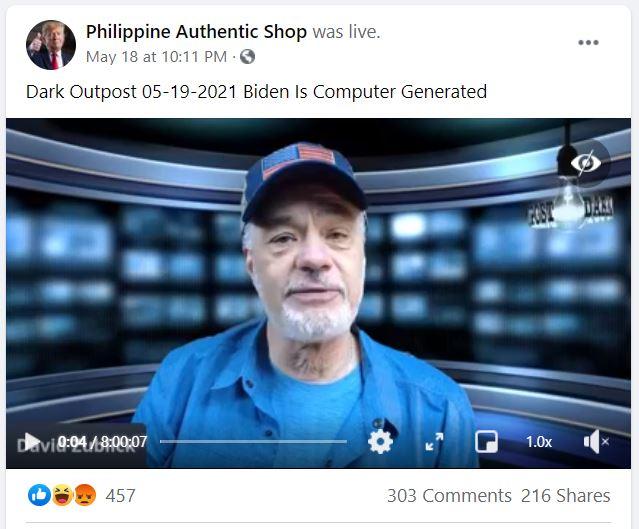 Many of the claims made in this video were circulating on conspiracy channels in March 2021 and debunked at the time. The main claim, included in the title of the video, is that it was not Biden, but a computer-generated hologram that interacted with a group of reporters on the south lawn of the White House on March 16, 2021, before boarding Marine One. Lead Stories published a fact check article about this on March 17, 2021.

Zublick says Biden is a hologram because of how his hand appeared to move through a microphone during a brief exchange with reporters. He also claims that the top of Biden's head is missing because Biden's white hair momentarily matches and blends in with the color of the overcast sky. In his video Zublick screenshares a Gateway Pundit article from March 17, 2021, titled, "GOING VIRAL: Biden Glitchy Video with Reporters Has People Spooked with Chopped Head and Hand Tricks." Embedded in the article is a tweet from Insider Paper that contains the Biden video in question. At 10 1/2 minutes into the Facebook video, Zublick references the Inside Paper video from Twitter as he says:

Notice the top of this head is missing.
CGI is nothing new, but it has never been used to such a dramatic extent in the past. And now what I want to do is slow this down a little bit and go back and forth with it and have you take a look at a little bit more of this. ... Take a look at this: This is the story as it is being reported by the Gateway Pundit. OK?

And this looks like it could possibly be a green screen effect when you see his hands pass through what appears to be a microphone windscreen. That of course is CGI. OK.
Let's back it up a little bit, push it forward again -- there he goes into the microphone, into the microphone.

That is not Joe Biden making an appearance.

But what the mainstream media who has been reporting on this and of course even the alternative media are saying that this is a green screen effect -- what you're actually seeing here is a holographic image of Joe Biden being transmitted from behind the scenes. All right?

He is getting ready to board, allegedly Marine One, early on Wednesday, making a rare live appearance before the press.

Zublick presents and knocks down a straw man fallacy by claiming that "mainstream media" is reporting that this glitchy video illusion is actually an artifact of a greenscreen, but that they are incorrect -- it is not a real person standing in front of a green screen, but an entirely computer-generated illusion.

Zublick is misrepresenting what was being reported. No mainstream media outlets reported that the effect was caused by a green screen -- that was a claim that came from other conspiracists. There were many media outlets, including Lead Stories, that debunked those green-screen conspiracies. They did not suggest this illusion was caused by a green screen. The Gateway Pundit article included from the day of publication an additional video from a different angle that showed Biden's hand moving near, not through, the fuzzy grey microphone -- but Zublick avoids showing that video to his audience. We have embedded the video below. Gateway Pundit introduced it:

Another video angle shows Biden with reporters on March 16, 2021, without the hand glitches.

This video produced by Mick West analyzes the perspective illusion of Biden's hand and the large microphone cover: