Did wolves attack Shrek the Sheep (archived here), a Merino sheep who escaped from a sheep station only to be found 6 years later covered in approximately 60 pounds of wool? No, that's not true: there are no native wolves in New Zealand, although there are non-native feral dogs.

The claim appeared in a Facebook post (archived here) published on July 28, 2021. It featured a screenshot of a tweet that included a picture of unsheared Shrek alongside John Perriam, Shrek's owner. The tweet read:

This sheep escaped a farm and spent 6 years in the mountains, during which time he grew 60 pounds of wool. Wolves tried to eat him, but their teeth could not penetrate the floof. You don't have to turn hard to survive the wolves, just be really, really soft and fluffy. 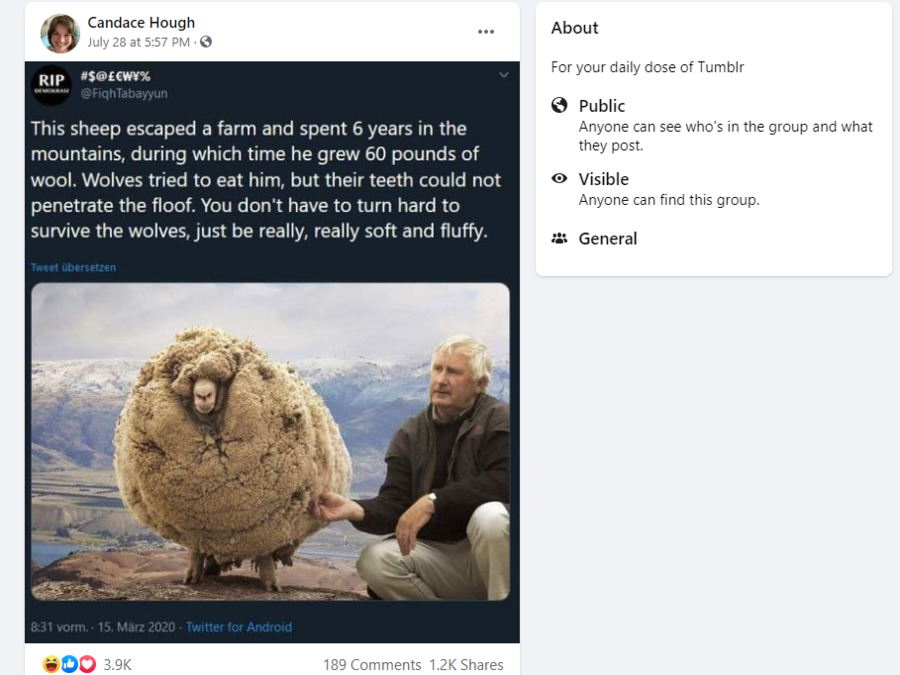 Although the post is meant to impart an inspirational message, there are no native wolf species in New Zealand. That's according to Mark Hostetler, a professor in the Department of Wildlife Ecology and Conservation at the University of Florida who has led a biodiversity program in New Zealand. In a phone call with Lead Stories on July 30, 2021, he explained that the country has no native predatory canines.

New Zealand has 6,000 known species of beetle and almost as many fungi, but just two land mammals, both bats. There are giant snails and tree daisies, flightless birds and 1,000-year-old trees - but few reptiles. The extreme and the unusual abound in New Zealand's flora and fauna, a high proportion of which are found nowhere else in the world.

Wolves (Latin: Canis lupus), native to regions including the Americas and Eurasia, are land mammals, and therefore are not included in New Zealand's species.

The Te Ara entry for "Exotic farm animals" (archived here) also explained the first appearance of dogs in the country:

Before the arrival of people in New Zealand, the only native mammals were three species of bat and eight species of seal and sea lion. Polynesians brought kiore (Pacific rats) and kurī (Polynesian dogs).

Feral dogs have historically been a nuisance in New Zealand and often attempted to attack sheep.

Lead Stories has debunked other claims regarding wildlife before, here, here and here.