Did the Saxon State and University Library Dresden (SLUB), one of the largest German academic libraries, ask its readers to bring in Russian books "for heating purposes"? No, that's not true: SLUB General Director Katrin Stump denied the leaflet's authenticity and said that the library had filed a criminal complaint about the claim.

The caption was originally written in German:

Translated via Chrome, it said:

The neo-Nazis are going crazy again.

The post contained an image of a German poster with the SLUB logo, which appeared to have been saved from somewhere else. 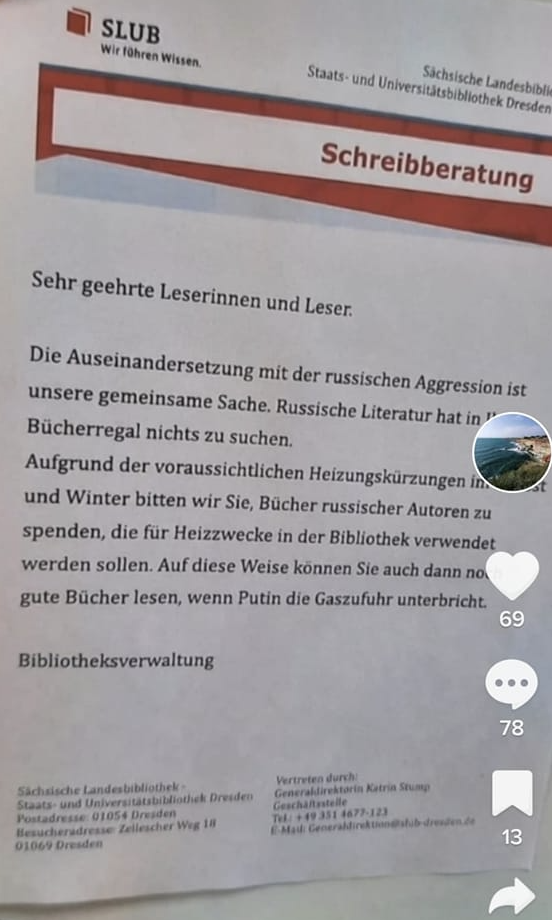 Dear Readers.
Dealing with Russian aggression is our
common cause. Russian literature has no
place in the bookshelf.
Due to the expected heating cuts in and
winter, we ask you to donate books by Russian
authors to be used for heating purposes in
the library. That way you can still read good
books even if Putin shuts off the gas supply.

However, two days before the Facebook post was published, on September 2, 2022, SLUB had already denied any connection between the library and the purported letter:

We have already filed a criminal complaint because of the fake letter. Please do not spread the false information any further ...

As a library, we stand for basic democratic values, reliable information and factual discourse on socio-political issues. I am shocked that several libraries have already been affected by manipulative disinformation in the past few days and that the originators do not even shy away from personal attacks.This shows once again the dangers this poses to our democratically constituted society.

The claim was replicated in several languages, spreading across many social-media platforms. In addition to German, similar posts were published in Bulgarian, Italian and Russian.

The neo-Nazi comment by the Facebook poster is part of the portrayal of Nazism as the main feature of Russia's enemies. In connection to Ukraine, this myth has been debunked multiple times.

Lead Stories has fact-checked other controversial claims related to the 2022 Russian-Ukrainian conflict.