Was Wuhan, China the first city to be "covered" with 5G technology and did this wireless communications network facilitate the origination and spread of COVID-19? No, that's not true: A telecommunications expert told Lead Stories that credible evidence for this claim does not exist. The timing of Wuhan's 5G technology rollout and the coronavirus pandemic is coincidental and no direct causal links have been established as of this publication.

The claim that 5G caused COVID-19 and influenced its spread has been at the center of pandemic-related misinformation circulating globally on social media since 2020. The notion reappeared in a video shared on Instagram on December 5, 2022. In the video, the unidentified host said on camera:

Did you know that the city that was covered with 5G technology first in the whole entire world was Wuhan, China back in 2019? 5G is really fast and the symptoms can mimic those of the word that we can not mention ...

A caption that accompanied the video read:

WUHAN, CHINA WAS THE FIRST CITY TO BE COVERED WITH 5G TECHNOLOGY COMPLETLEY BACK IN 2019. HUMANS ARE NOT MEANT TO WITHSTAND THESE RADIOACTIVE-MICRO WAVES. DO Your own research. I can't be near those towers. Nature is the only way & putting away the computers and cell phones we once loved. #bigtech #manvsmachine #thematrixisreal⚡️📞 ... Do not want to leave you feeling hopeless, in the end God will give us the victory. I know it. God Bless you all, Goodnight! #wuhanchina #5gtowers

Here is a screenshot of the post at the time of the writing of this fact check: 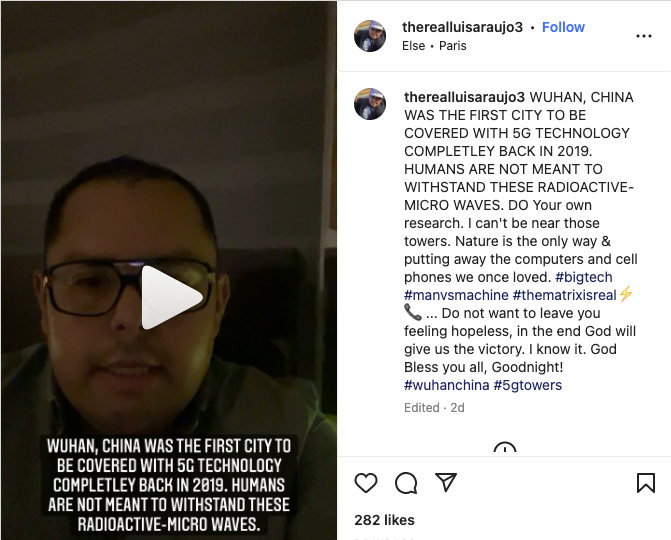 The idea that 5G telecommunications technology severely worsened or caused the coronavirus pandemic has been dubbed as an "entirely unfounded" claim by credible scientists and institutions, and described by the United Nations as a "hoax with no technical basis."

Martin Sims is the managing director of PolicyTracker, one of the companies that produce European 5G Observatory, a 5G market-tracking website supported by the European Commission. In an email to Lead Stories on December 7, 2022, Sims said there is no basis for the claim that 5G facilitated the COVID-19 pandemic. He added that legitimate institutions, including the International Commission on Non-Ionizing Radiation Protection (ICNIRP) and the U.K government, have also debunked the theory.

These claims are not supported by any evidence (not even extremely weak evidence), and the large body of scientific knowledge regarding the EMFs relevant to 5G demonstrates that those claims are not feasible. EMF [electromagnetic frequency] exposure from 5G devices does not cause COVID-19, nor does it have any effect on the disease process or health outcomes of those who are infected by the new corona virus (SARS-CoV-2) that causes COVID-19. As described by the WHO [World Health Organization], you need to physically come into contact with the corona virus to become infected by it, and as the EMFs from 5G cannot carry viruses, they cannot bring you into contact with the virus.

What is 5G technology?

5G technology is the fifth generation of wireless cellular communications technology, which the U.S. Federal Communications Commission reports will allow information to be shared and transferred at faster rates and on a larger scale than earlier versions of this technology. Cell phones and other smart devices that employ 5G use bay stations to make a connection across frequency bands like those used in FM or AM radios, notes Worcester Polytechnic Institute in Massachusetts. The American Cancer Society describes 5G as non-ionizing radiation like those in microwaves and visible light; different than stronger (ionizing) radiation like gamma and x-rays, which can break the chemical bonds in human DNA.

In August 2019, the Chinese government stated that a number of venues had rolled out 5G technology, but, as Full Fact, a British fact checking organization, reported, it is unclear if Wuhan was the first city in China to do so.

Reports at the time suggested that Wuhan was one of the "first pilot cities" in China where early 5G trials and rollouts took place. In a November 1, 2019, news release, the Chinese government announced that 86,000 base stations had been launched across 50 cities on October 31, 2019 -- including Beijing, Shanghai, Guangzhou and Shenze -- by China's three major mobile operators, China Mobile, China Unicorn and China Telecom. At the time, it was dubbed "one of the world's largest " 5G networks, the BBC reported.

A 2021 scientific review of existing literature proposed a possible link between COVID-19 and exposure to radiofrequency radiation from wireless communications, or wireless communication radiation (WCR), including 5G. However, the review was limited by a number of factors, including access to experimental data on 5G exposures and inconsistent reporting in the research examined.

"This is a divergent view and one paper does not constitute proof," PolicyTracker's Sims told Lead Stories. "I have great concerns about the quality of supporting evidence presented in the paper -- it is not representative of the majority of research."

The authors themselves noted that their findings did not prove a causal relationship between 5G and COVID-19:

Epidemiologists, including those at the CDC [Centers for Disease Control and Prevention], consider multiple causal factors when evaluating the virulence of an agent and understanding its ability to spread and cause disease. Most importantly, these variables include environmental cofactors and the health status of the host. Evidence from the literature summarized here suggests a possible connection between several adverse health effects of WCR exposure and the clinical course of COVID-19 in that WCR may have worsened the COVID-19 pandemic by weakening the host and exacerbating COVID-19 disease. However, none of the observations discussed here prove this linkage. Specifically, the evidence does not confirm causation. Clearly COVID-19 occurs in regions with little wireless communication.

The International Telecommunication Union, a UN body that works with communication technologies, stresses that there is "no scientific basis of any relation between the transmission of the coronavirus and 4G or 5G or any other electromagnetic waves."

Research on 5G by other credible international bodies also rejects the notion that this technology can have a negative effect on human health in general.

The European Commission has contended since 2019 that exposure levels to 5G radiation are similar to that of previous networks. As the agency noted in June 2020, COVID-19 also spread in countries that did not have 5G installations.

In a February 2020 Q&A, the World Health Organization reported that "no adverse health effect has been causally linked with exposure to wireless technologies." If "overall exposure" to their radiofrequency "remains below international guidelines, no consequences for public health are anticipated," the WHO wrote.

Most recently, a 2021 review published in the Journal of Exposure Science & Environmental Epidemiology reported that research "showed no confirmed evidence" that low-level radio- frequency "fields above 6 GHz such as those used by the 5 G network are hazardous to human health."