Has NASA footage of a spaceship 3,200 kilometers (1,988 miles) long been recently released by a NASA engineer turned whistleblower? No, that's not true: There is no evidence that a spacecraft of this size followed the Apollo 13 mission to the moon and back. The UFO claims made by Bob Dean, who died in 2018 and was never a NASA engineer, have never been proven.

The claim appeared in an article (archived here) published by thedailyworld.net on January 12, 2023, under the title "NASA footage depicting a spaceship 3,200 kilometers long and of unknown origin is released by a former military organization (Video)." It opened:

A former NASA eng ineer turned whistleblower, who has claimed that NASA has known about the existence of extraterrestrial life for decades, recently released a video of a long spacecraft. The video has sparked speculation and conspiracy theories amongst viewers. 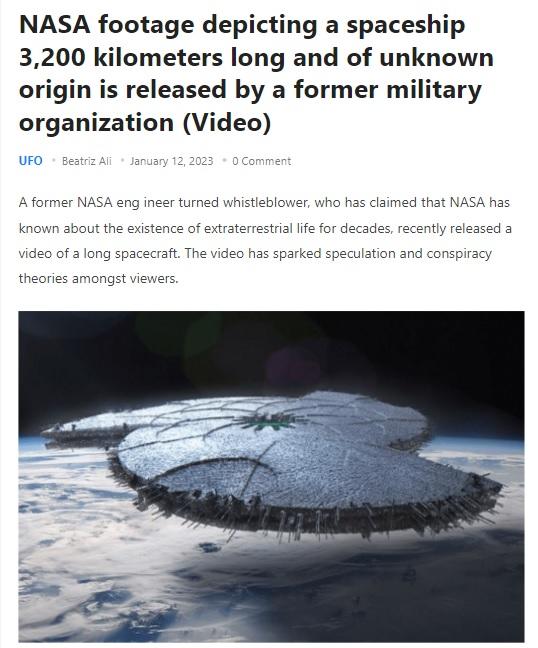 The spacecraft pictured in the article is not from a real video of a long spacecraft recently released by a former NASA engineer whistleblower -- this image is from the 2016 science fiction movie "Independence Day: Resurgence." This image appears in the website portfolio of the concept artist for the movie, Jared Krichevsky.

Although the Daily World article speaks very briefly of a former NASA engineer, it introduces Bob Dean, who was never a NASA engineer and had a career in the U.S. Army:

Bob Dean is a former member of NATO intelligence, high-ranking military man, who has been involved in major UFO research. Today, already retired, he decided to divulge everything he knows to the world. In his newest video, Bob Dean showed images of an alien object about 3200 km long near the planet Saturn in 1980.

UFO researcher Dean died on October 11, 2018, so there is nothing that he could have recently divulged. The article suggests that the embedded video is "his newest," but it was posted on YouTube on September 14, 2015. Lead Stories was unable to find any information corroborating the claims Dean made in the video about a 2,000-mile (3,200-kilometer) long artificial metal object that followed the Apollo 13 all the way to the moon and back.

After his retirement from the military, Dean made claims about a document he saw in the 1960s when stationed with NATO and assigned to the Supreme Headquarters Allied Powers Europe (SHAPE), NATO's military headquarters. This document was purportedly titled, "The Assessment: An Evaluation of a Possible Military Threat to NATO Forces in Europe." Dean's claims have never been verified.

Dean's claims gained enough attention that Gregory Pedlow, SHAPE historian, thoroughly reviewed his investigation of Dean's claims regarding the "Assessment" document. This report, in the form of a .PDF document, can be found hosted on the NATO website. Pedlow concludes that the image of the cover sheet of the "Assessment" document is a forgery and that the document never existed:

In conclusion, extensive searches of NATO and SHAPE archives have failed to find the alleged 'Assessment' itself or even the slightest hint that such a study was every carried out. Given the huge effort that Mr. Dean alleges went into this study and the extended time period during which it was prepared (2½ years according to Mr. Dean), it seems inconceivable that not even the slightest trace of this massive study and the resulting 'Assessment' would remain anywhere in NATO or SHAPE, if the document had actually existed. I therefore stand by my original conclusion from 1991, which is that no such document was ever produced by SHAPE or NATO and thus it could not have been seen by Mr. Dean while he served at SHAPE.