Can illness caused by milk be identified simply by looking at one's iris without medical equipment? No, that's not true: Iridology -- a theory that a person's iris can tell about their medical conditions -- has long been proven unfounded, and there is no scientific consensus that pasteurized milk may be harmful.

The claim appeared in a video published on TikTok on January 4, 2023. The title said: 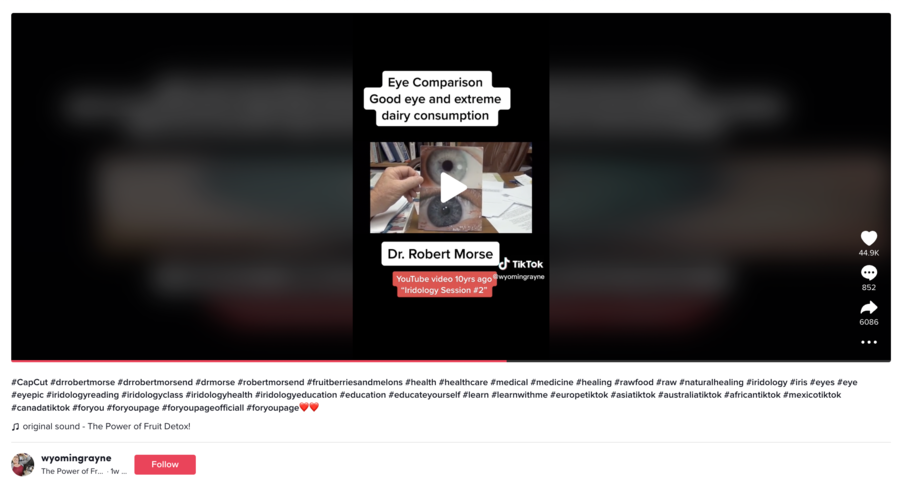 At the 3:52 mark, the male narrator shows pictures of another person's eye, pointing to the iris with uneven coloration:

Here's a dairy farmer up here from Upper New York. See how thick, thick that lymph system is in this guy. He also has an ice cream manufacturing business. So he came in one day -- he's 84 when I took this picture, he was mad at me because I had the book in my office on milk and how bad it was for you. And he said, 'I'm 84 because I drink milk.' 'You're very wrong,' I said. 'No, you're 84 because you have good genes. You're in here with cancer because of the milk.' Let's look at this. This is up here getting into the right ear, the right cerebellum, and remember we talked about this as the dizzy equilibrium center up here. So, Brian, you got this coming your way here, right side cerebellum back of the neck. A lot of congestion up here in the sinuses. This looks like to the pituitary area ...

According to the National Cancer Institute, cancers are diagnosed via three main tools: lab tests, imaging tests and biopsy. Neither the Institute nor other government agencies mention looking at the iris as a reliable way to establish a diagnosis.

As highlighted by hashtags under the video, the claim is based on iridology, a pseudoscience developed by a Hungarian homeopath named Ignatz Peczely in 1893. Since then, no study has confirmed his hypothesis arguing that discoloration in different parts of the iris may point to a particular issue with a particular organ.

A 1979 study that asked three U.S.-based iridologists to identify patients with kidney disease based on the pictures of their eyes concluded:

Iridology had no clinical or statistically significant ability to detect the presence of kidney disease. Iridology was neither selective nor specific, and the likelihood of correct detection was statistically no better than chance.

A 2003 study confirmed that once again:

Controlled studies reveal that iridology is of no use whatsoever for the detection of cancer and other diseases in the stomach, intestines, kidney, lungs and heart. The reason for the continued popularity of iridology is discussed, and it is concluded that this type of alternative medicine is not harmless.

The opposite is also true: Fibers in one's eyes cannot predict the strength of a person's immune system, as reported by Lead Stories.

Lead Stories also noted that iridology should be distinguished from a retina examination that involves specific medical equipment to identify some conditions that are not visible with a bare eye (for example, diabetic retinopathy or macular degeneration).

Additionally, there is no universally accepted recommendation against milk for the entire population as a whole. The Food and Drug Administration website only warns about the dangers of raw milk that, unlike pasteurized milk commonly sold in supermarkets, may contain disease-causing pathogens.

While some may be allergic to milk or have other conditions such as lactose intolerance leading to the exclusion of milk from one's diet, there is no scientific consensus suggesting that milk may be a single factor causing any illness.

Milk -- especially low-fat milk -- is explicitly included in the 2020-25 dietary guidelines for Americans.

Milk consumption was more often related to benefits than harm to a sequence of health-related outcomes. Dose-response analyses indicated that an increment of 200 ml (approximately 1 cup) milk intake per day was associated with a lower risk of cardiovascular disease, stroke, hypertension, colorectal cancer, metabolic syndrome, obesity and osteoporosis. Beneficial associations were also found for type 2 diabetes mellitus and Alzheimer's disease.

The study found that the prior research looking into possible connections between milk and cancers did not show consistent results for many types of this disease, with a few exceptions. In cases of colon and rectal cancer, milk was associated with reduced risks. However, there was some indication that this product might increase the relative risk of prostate cancer.

However, it is important to separate absolute and relative risks. The former describes the chances of getting a disease in one's lifetime while the latter compares the health outcomes of one group to another. When a 2020 study found that milk consumption increased the probability of breast cancer, the National Breast Cancer Foundation described the evidence as "limited" and pointed out that it contradicted previous research.

A Washington Post article explained that the paper was focused on relative risk, which was significantly higher than absolute risk. In addition, as the newspaper wrote, the study was observational, meaning that its goal was to explore whether there are any associations between the two things but not to establish a cause-effect relationship.