Does a video screenshot of George Floyd show he has hair when police pulled him from a car, but he had no hair when a Minneapolis officer knelt on his neck? No, that's not true: A close examination of the video from which the screenshots were taken show no inconsistency in Floyd's head. The claim appeared to imply that the incident that triggered weeks of protests around the United States was staged with "crisis actors." Lead Stories has previously debunked similar claims.

A good friend of mine just made me aware of something- so I watched the video again and noticed That George Floyd had hair when he was arrested and when he was pushed into the Police Car- But when Derek Chauvin pulled him out the other side of the car and kneeled on him- he had no hair. also the shape of his head dramatically changes. Please get this shared madly."

Here is a screenshot of the post, with larger images: 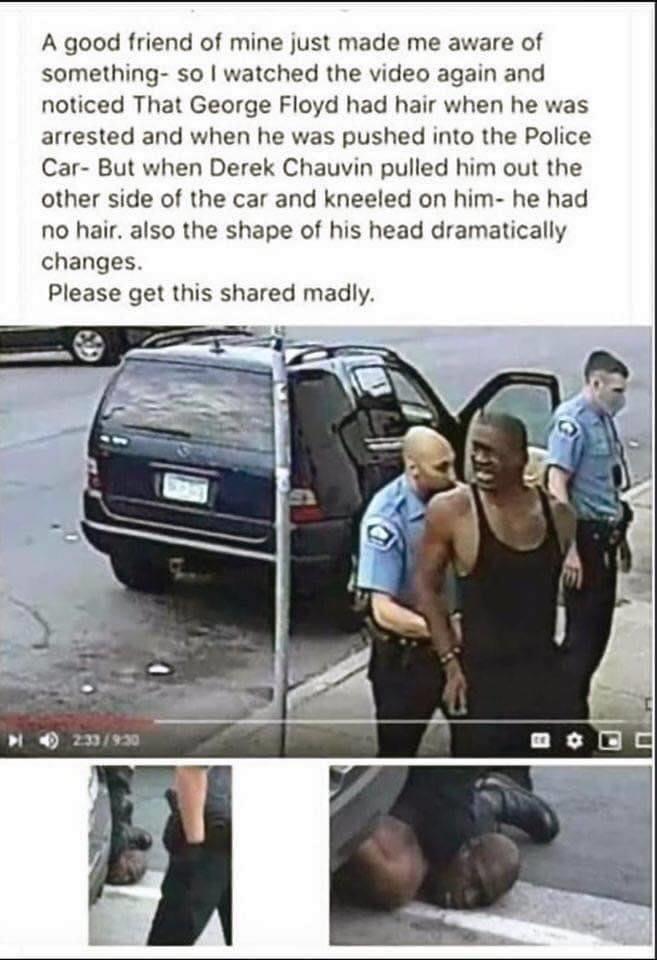 The post makes little sense other than to suggest that Floyd's death was a hoax perpetrated against the public, somehow using actors to pull it off. Nothing about the post is accurate, as Floyd, upon close examination of the footage in a recreation of the arrest by The New York Times, clearly shows he has hair. Consider the below screenshot, captured by Lead Stories: 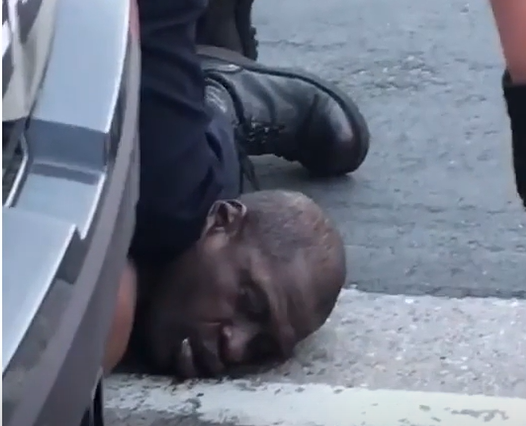 True, Floyd's closely cropped hair makes it difficult to see at first. But the hair is there. There is simply no evidence -- at all -- that one person was arrested, then another was knelt on. Even the photo from the Facebook post, when enlarged, shows hair on his head.

Here is the YouTube video posted by The New York Times that recreates the events leading up to Floyd's death. The text below the video reads, "The Times has reconstructed the death of George Floyd on May 25. Security footage, witness videos and official documents show how a series of actions by officers turned fatal. (This video contains scenes of graphic violence.)":

Any viewer who looks closely enough at the video will see that Floyd has hair, and that his head, while possibly appearing a different shape due to the pressure under the officer's knee and against the pavement, has not changed. There are not two different people; it was Floyd throughout the video.

Still, conspiracy theorists have pushed the notion that Floyd never actually died -- that he was alive and off living somewhere as part of some play on the world -- or that crisis actors staged the event and Floyd wasn't even a real person. This is all false.

Lead Stories has debunked those conspiracy theories and others concerning George Floyd's death:

--Fact Check: George Floyd is NOT Alive And There Is No Evidence Video Of His Death Was Faked

--Fact Check: George Floyd Was NOT 'Found To Be Innocent,' No Word On If $20 Bill Was Real