Besides those three topics we also covered claims ranging from many debunks about the World Economic Forum's Great Reset to deep doubts that Americans ever landed on the moon to a deepfake video that purportedly showed President Joe Biden singing "Baby Shark."

We Pulled No Punches Tackling Conspiracy Theories About Election Fraud

In all, they wrote more than 140 fact checks and were still combating election falsehoods as 2022 wound down.

Among the falsehood balloons punctured by Lead Stories:

We Launched espanol.leadstories.com Before The Midterm Elections 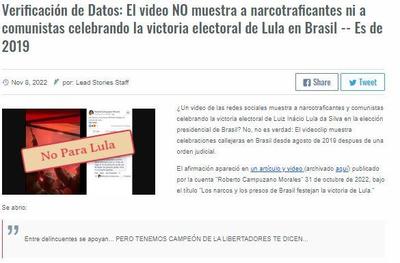 Confronted with evidence of a rising flood of disinformation in Spanish aimed at U.S. users, Meta asked Lead Stories to set up a new all-Spanish fact checking service. With experience in Texas' borderlands, Florida and Washington, D.C., the new team began publishing October 13, addressing a wide range of false claims about elections and immigration as well as scams that target Spanish speakers.

Since launching in late September the team has published 39 fact checks so far, with more being added every day.

And that was not the only new language Lead Stories was active in ...

When Russia Invaded Ukraine, We Popped Up Russian And Ukrainian Sites 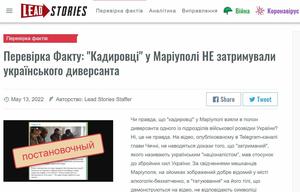 Meta, seeking to provide a backstop for Russian-language and Ukrainian-language fact checkers, should war disrupt them entirely, asked Lead Stories to temporarily provide service in both languages.

Russian.leadstories.com went live in three weeks, with a veteran Moscow correspondent as editor, supervising expatriate Russians, two of whom had worked for the once-brave investigative newspaper Kommersant and for TV Rain. They produced 85 stories in Russian during the four-month program, slowing the spread of disinformation on Russian Facebook. Two still write for Lead Stories, informing our English-language coverage of propaganda campaigns.

Ukrainian.leadstories.com went live the same day as the Russian site, March 8. A team of Ukrainian journalists tracked propaganda and fake news, using Lead Stories' proprietary tracking tools to shoot down fake stories from both governments. The team, all women, worked from Kyiv, from eastern Ukraine and when it was no longer safe for them to remain, they decamped and continued working from neighboring countries. In four months, they wrote 66 debunks in Ukrainian that were used by Facebook to slay disinformation in Ukraine.

As 2022 wound down, the Missouri Supreme Court upheld the lower courts' rulings in favor of Lead Stories in a slander suit brought by The Gateway Pundit website against us. Writer Dean Miller had debunked Gateway Pundit's claims about its technological sleuthing of files from the purported Hunter Biden laptop.

The year had started well for Lead Stories' legal campaign to protect fact checking from intimidation by those who profit from misinformation. In February, Delaware's Supreme Court heard oral arguments and then ruled against author and talk show host Candace Owens, who had sued Lead Stories and USA Today, seeking to shut down fact checking of her false claims that the government was overstating the scope and danger of the COVID-19 pandemic.

We figured out who was behind it. Meet the Cambodian programmers spamming thousands of Facebook groups...https://t.co/gLvQfHI6Zp