Were the Twin Towers almost empty when the 9/11 attack took place on September 11, 2001? No, that's not true: The recycled conspiracy theory contradicts a large body of evidence that proves the opposite, including government documents, medical examiner's reports and video and photo materials shot by journalists and filmmakers at Ground Zero on the day of tragedy.

The claim appeared in an Instagram post on November 9, 2022, under the title "Hollow Towers." The caption said:

Mostly all the video footage of 9/11 was CGI, the towers were hollow, apart from several floors .

The video opened with an exchange of two unidentified men whose faces never appeared on the screen:

VOICE 1: ... There was only about 11 businesses actually occupying the North Tower at the time. Is that correct?

VOICE 2: We've never ruled it out. 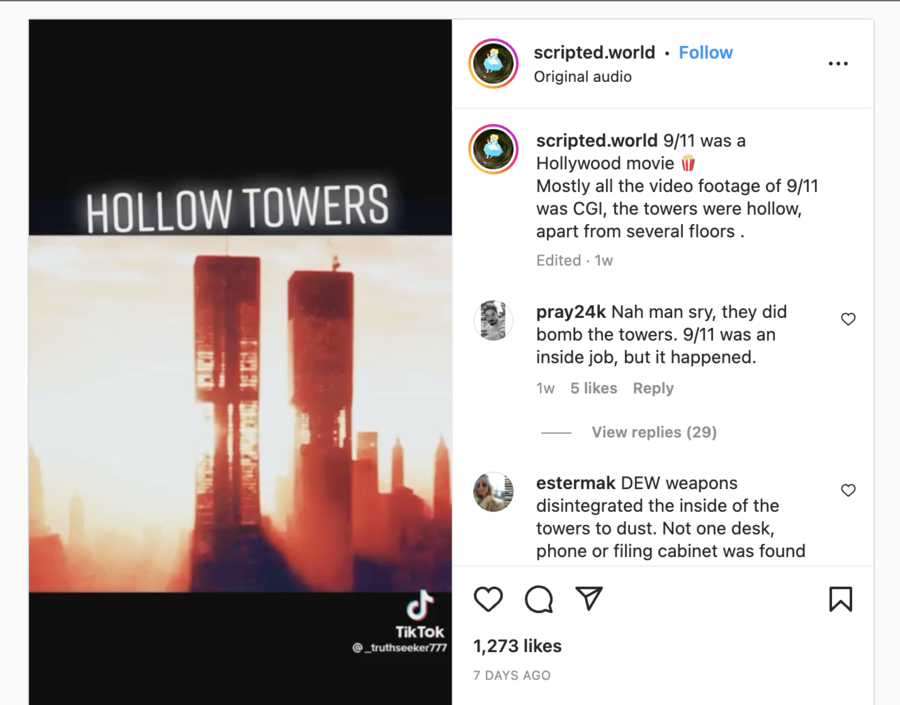 The post did not name any sources corroborating the claim.

While a reverse image search does not immediately indicate who took the still images used in the post and when, there is some indication that at least one of them may come from the pre-internet era. In 2017, a website about New York City published the same photo of the sun shining through the towers with a caption saying that it was taken in 1972 when the complex was still under construction.

Other still images reused in the post appear to have been taken between 2000 and September 11, 2001, by a collective of artists whose residency was located in one of the towers as they worked on an art project.

That, however, contradicts an overwhelming amount of evidence to the contrary.

According to the website of the 9/11 Memorial and Museum, 430 companies had offices in the twin towers, and 35,000 people were employed there at the moment of the attack that took the lives of 2,753 people in New York City. As NPR reported in 2021, about 40 percent of the victims -- remains of at least 1,100 people -- are still unidentified.

The 9/11 Commission published a detailed report about the circumstances surrounding the attack. It counted people trapped in different sections of the towers in hundreds:

At 8:46:40, the hijacked American Airlines Flight 11 flew into the upper portion of the North Tower, cutting through floors 93 to 99. Evidence suggests that all three of the building's stairwells became impassable from the 92nd floor up. Hundreds of civilians were killed instantly by the impact. Hundreds more remained alive but trapped. ...

Many civilians in the South Tower were initially unaware of what had happened in the other tower. Some believed an incident had occurred in their building; others were aware that a major explosion had occurred on the upper floors of the North Tower. Many people decided to leave, and some were advised to do so by fire wardens. ...

At the lower end of the impact, the 78th-floor sky lobby, hundreds had been waiting to evacuate when the plane hit

The tragedy was broadcast live as it was unfolding, with some TV journalists interrupting their reports in the middle, being forced to rush to safety as the towers collapsed. The shots from the scene capturing survivors leaving the buildings were included in multiple documentaries. According to the Smithsonian Magazine, about 500,000 people were evacuated from Ground Zero by ferries.

The buildings collapsed not because they were pre-demolished but because of the fire caused after the initial impact of passenger aircraft flying directly into each tower, concluded a FEMA report. Another report published by the National Institute of Technology in 2005 reached the same conclusion.